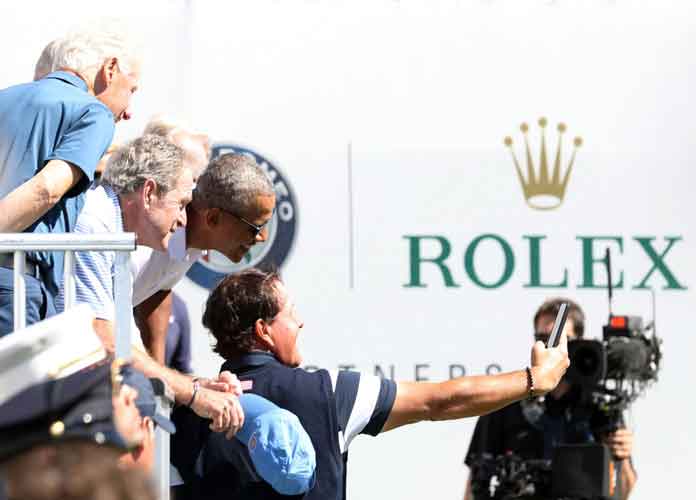 The Presidents Cup began at Liberty National Golf Club in Jersey City on Thursday, and Phil Mickelson kicked off the competition with quite an impressive photo.

The 47-year-old five-time major champion snapped a selfie with former Presidents Bill Clinton, George W. Bush and Barack Obama. This marked the first time three U.S. presidents attended the Presidents Cup since the event was founded in 1994. The PGA Tour has been preparing for a possible visit fro President Donald Trump on Sunday, although this has not been confirmed.

Mickelson’s brother Tim, a former golf coach, shared the photo — which was poorly cropped so as not include Mickelson’s full face — on Twitter, captioning it: “When you can take a selfie with three US Presidents, you do it!!”

When you can take a selfie with three US Presidents, you do it!! pic.twitter.com/E3pNlZ07gs

Even some of the foreign players were thrilled to see the trio of former U.S. leaders, who greeted the wives of several of the competing golfers.

“It was one of the most exciting moments of my life, standing there,” said South Africa’s Charl Schwartzel. “I was looking forward to this Presidents Cup for a very long time, and I didn’t expect all the presidents to be there. Just to get to meet them was a dream come true for me. Then to hit that first tee shot with the wind pumping off the right was quite intimidating.”

This year, Steve Stricker is the captain of the U.S. team at the Cup, while Nick Price leads the International team.

Price has visited the White House when Clinton and Obama were in office.

“Those were three of the most powerful men of their time,” he said. “Icons, honestly. And they all said the same thing: ‘Guys, we can’t pull for you, but we want you to have a good match.’ They were great. Of course, you’re not going to pull for us. You guys are Americans. But they’re golfers, and they’re great sportsmen, too. And our boys really appreciate that.”

The U.S. team is the defending champion. The tournament will end on Sunday.

NBA Will Not Play On Election Day, Encouraging Fans To Vote