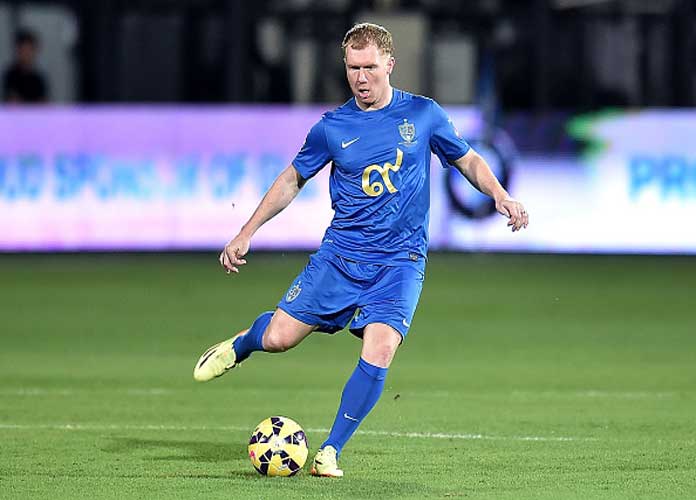 BANGKOK, THAILAND - DECEMBER 05: Paul Scholes of Team Cannavaro runs with the ball against Team Figo during the Global Legends Series match, at the SCG Stadium on December 5, 2014 in Bangkok, Thailand. (Photo by Thananuwat Srirasant/Getty Images)

Scholes, who will be 42 later this month, said he believes the club’s problems are not Jose Mourinho’s fault, and emphasized that the former Chelsea manager is backed to improve United’s poor season.

“It’s been quite a painful three years,” Scholes said on BT Sport. “And I think the next 18 months to two years could be very similar until this manager has three or four transfer windows to really get a team that he wants. I think this team in two years will be unrecognizable from what it is now. But, whatever we can do in this two years has to be a bonus. Whether they can win the League Cup whether they can win the FA Cup.”

Scholes continued his criticism of his former team: “Can they win this competition [the Europa League]? It doesn’t look like it. And it has shown in the last three years that they are not capable of winning the league with this squad.

“There’s three or four better teams in the Premier League. We know this team at this moment in time isn’t capable of challenging for the league.”

Rather than comment on or write about the incredibly frustrating 90 minutes United played on Thursday, Scholes simply re-created the chaos and lack of unity on the field in Turkey on his team sheet provided by the studio.

The Red Devils are now at serious risk of failing to reach the knockout stage of the competition, despite spending £145 million ($181 million) this summer on new signings Paul Pogba and Zlatan Ibrahimovic.

United have won just two of their last seven games in all competitions and are already well off the pace in the Premier League – eight points behind crosstown rivals Manchester City.

The Red Devils will next travel to face Swansea in Sunday’s Premier League match.

BANGKOK, THAILAND – DECEMBER 05: Paul Scholes of Team Cannavaro runs with the ball against Team Figo during the Global Legends Series match, at the SCG Stadium on December 5, 2014 in Bangkok, Thailand. (Photo by Thananuwat Srirasant/Getty Images)