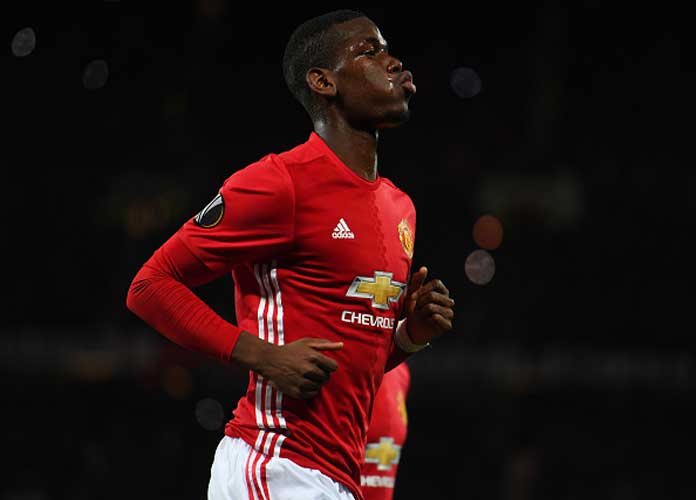 MANCHESTER, ENGLAND - OCTOBER 20: Paul Pogba of Manchester United celebrates after scoring the opening goal from the penalty spot during the UEFA Europa League Group A match between Manchester United FC and Fenerbahce SK at Old Trafford on October 20, 2016 in Manchester, England.

Paul Pogba scored twice as Manchester United cruised to a comfortable, 4-1 home victory over Turkish club Fenerbahce on Thursday and jumped to second in Europa League Group A.

With captain Wayne Rooney back with the team, United did not create many scoring chances before the Istanbul-based visitors gave away two cheap penalties.

Pogba, this summer’s world-record signing, scored the second and third goals of his career with the Reds. The 23-year-old France international opened scoring in the 31st minute after Simon Kjaer fouled Juan Mata, slotting the ball into one of the corners of the net.

Three minutes later, Anthony Martial scored on a penalty after being taken down by Sener Ozbayrakli at the top of the penalty area, despite the crowd at Old Trafford chanting Rooney’s name. The forward needs three goals to match Sir Bobby Charlton as United’s all-time record scorer.

Pogba scored his second goal in first-half stoppage time to make it 3-0 at the break. Rooney started the move on the right, clipping the ball infield where Jesse Lingard’s flick gave Pogba the chance to take aim. Racing towards the ball, he aimed for the top corner and scored with a fantastic, arcing finish from just outside the penalty box.

Three minutes after halftime, Lingard finished another great passing exchange between Pogba and Rooney with a sharp, 25-yard drive.

Robin van Persie, a former United star, then scored Fenerbahce’s lone goal in the 83rd minute by meeting a low cross, but by then the game’s result was nearly certain.

United are level with Feyenoord on six points, two clear of Fenerbahce at the halfway point in Group A.

Sam Allardyce attended the match, his first one since his disgraceful departure as England manager. He sat beside former United manager Sir Alex Ferguson and a few seats away from David Gill, one of the Football Association executives who appointed him.

United boss Jose Mourinho commented on Pogba’s performance on Thursday, which was praised much more than his lackluster showing in Monday’s goalless draw with Liverpool.

“Two days ago he was the worst player in the Premier League and 48 hours later he’s phenomenal,” said Mourinho. “He needs time. I’m happy with his performance because he gave us what we need.”

Rooney’s inclusion– after being named as a substitute for the previous four matches– gave the veteran striker an opportunity to demonstrate how great an asset he is to Manchester United.

Fenerbahce had been the opponents at the start of Rooney’s– England’s top scorer– United career, when he scored the first three of his 246 goals for the club with a debut hat-trick.

United will next visit Chelsea in a Premier League match on Sunday, while Fenerbahce will visit Konyaspor in Monday’s Süper Lig game.

MANCHESTER, ENGLAND – OCTOBER 20: Paul Pogba of Manchester United celebrates after scoring the opening goal from the penalty spot during the UEFA Europa League Group A match between Manchester United FC and Fenerbahce SK at Old Trafford on October 20, 2016 in Manchester, England. (Photo by Laurence Griffiths/Getty Images)

Read more about:
Fenerbahce Manchester United Paul Pogba Soccer
Listen to the uInterview Podcast!
Get the most-revealing celebrity conversations with the uInterview podcast!