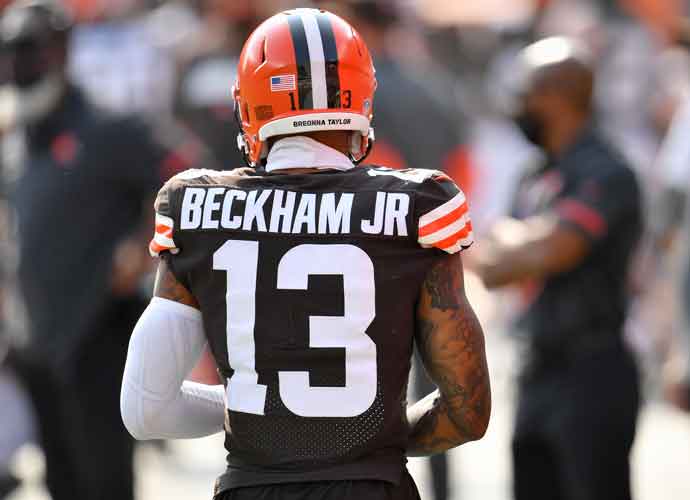 CLEVELAND, OHIO - SEPTEMBER 27: Wide receiver Odell Beckham Jr. #13 of the Cleveland Browns walks on the sidelines with the name of Breonna Taylor on his helmet during the second half against the Washington Football Team at FirstEnergy Stadium on September 27, 2020 in Cleveland, Ohio. The Browns defeated the Washington Football Team 34-20. (Photo by Jason Miller/Getty Images)

Odell Beckham Jr. is back ladies and gentlemen!

The electric wide receiver just made his season debut on Sunday against the Chicago Bears after being listed on the Cleveland Browns injury report for the past 11 months.

Beckham was targeted nine times and had five receptions for 77 yards, as well as a 10-yard, run, good for a first down.

OBJ makes his first catch of the season 👏

OBJ tore his ACL back on October 25 in an attempt to tackle Bengals cornerback Darius Phillips after an interception.

“The first time in a very long time, a lot of emotions, a lot of things running through you as you’re back out in the stadium,” he told the Akron Beacon Journal.

However, the three-time Pro Bowler conceded that he isn’t quite back to his peak form.

“It’s still the dream to be in the NFL and play in this game, so it was a lot to take in today. It just felt like I could never get my legs going. It’s just exhausting. But we came out with a W, and that’s all that matters.”

On the bright side, the ACL surgery and rehabilitation process have been successful and his season debut against the Bears certainly marks a step in the right direction.

The Browns will desperately need Beckham to stay healthy and perform moving forward, as wide receiver Jarvis Landry will remain on the sidelines for several games after suffering a knee injury.