The Cleveland Browns Are Poised For A Big Year - uSports.org 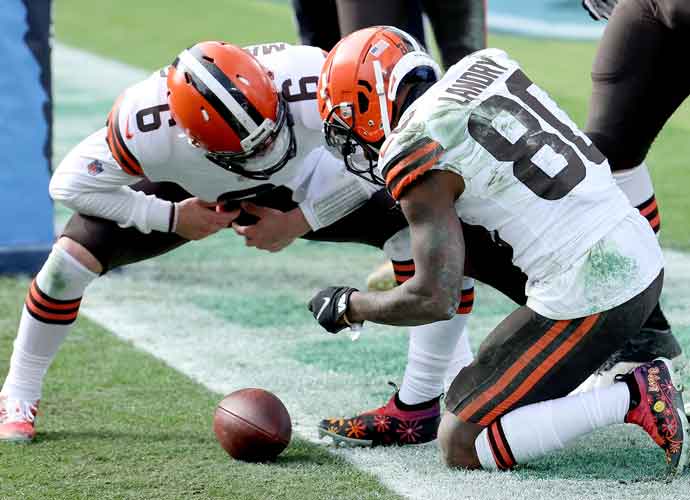 NASHVILLE, TENNESSEE - DECEMBER 06: Quarterback Baker Mayfield #6 and Jarvis Landry #80 Cleveland Browns celebrate a touchdown against the Tennessee Titans in the first quarter in the first quarter at Nissan Stadium on December 06, 2020 in Nashville, Tennessee. (Photo by Andy Lyons/Getty Images)

The Cleveland Browns Are Poised For A Big Year

The race for the AFC will be super interesting this year. For the first time in two seasons, the Kansas City Chiefs feel vulnerable, especially after their 31-9 drubbing by the Tampa Bay Buccaneers in the Super Bowl. Star tight end Travis Kelce acknowledges that teams like the Cleveland Browns are coming for them. “They’re definitely a contender, without a doubt. It’s definitely there,” he said. “Baker [Mayfield] and the gang have upped the ante, made this team an unbelievable team and a team you have to prepare for and take seriously. I think that moving forward without a doubt, I can see a lot more playoff games between us, and I’ll just take it one day at a time and hope for it. I think the Browns and Chiefs are definitely neck and neck.”

The Browns have certainly built a complete roster entering this season. With needs in the secondary, and at linebacker, as well as defensive line, the Browns managed to improve all three units, and will certainly have a better defense than the one that allowed the 21st-most points in the league. At safety and corner, the Browns added John Johnson III and Troy Hill from the Los Angeles Rams. The Rams had the best pass defense in the NFL last year, so to steal two players from them is surely a benefit.

This team also gets Odell Beckham Jr. back on offense. The Browns are positioned to do massive things this year. When asked about the team’s Super Bowl aspirations this year, wide receiver Jarvis Landry expressed confidence. “Why not? It’s something that people always say you should not talk about, but nobody trains or nobody does what they do to not be a champion,” he said. “So that’s the standard. So why not talk about it? It’s real. It’s sick to be humble about what everybody is actually chasing.”