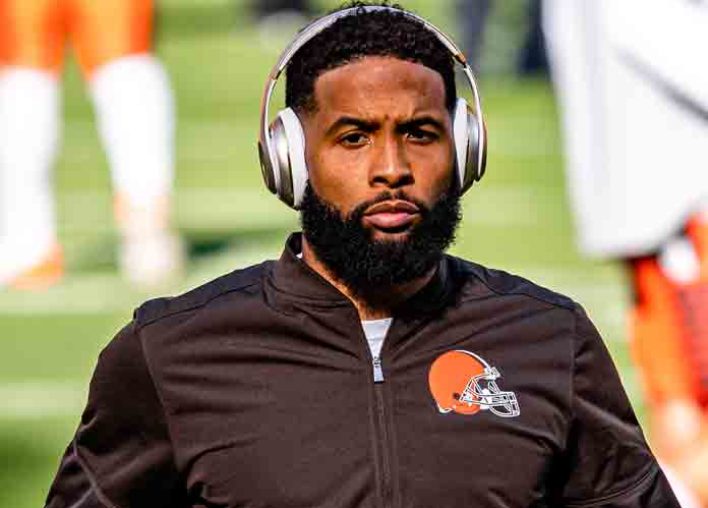 Odell Beckham Jr. with the Cleveland Browns in 2019 (Erik Drost/Wikipedia)

Cleveland Browns star wide receiver and LSU alum Odell Beckham Jr. is in hot water with the New Orleans Police Department, which has issued an arrest warrant for “simple battery,” for his actions in the aftermath of LSU’s 42-25 victory over Clemson in the College Football Playoff National Championship. Video surfaced earlier this week which shows Beckham slapping an security guard’s rear-end in the LSU locker room, which can be seen below in a video from Complex Sports:

An arrest warrant has been issued for Odell Beckham Jr. after smacking a cop on the butt.

The news comes on the heels of Beckham being seen on video handing out cash to LSU players after the game, which would be in violation of NCAA bylaws if the cash were real. LSU quarterback and Heisman winner Joe Burrow said on the Barstool Sports “Pardon My Take” Podcast that the cash was real earlier this week, though both LSU and the NCAA are looking into the matter.

In the state of Louisiana, punishment for simple battery carries a maximum fine of $1,000 and no more than six months in jail, though there is the possibility of both occurring. It was confirmed by the New Orleans Police Department public affairs office that the security guard in the video is the one who filed the complaint.

“We are aware of the incident and have been in touch with Odell and his representatives on the matter. They are cooperating with the proper authorities to appropriately address the situation,” read a statement issued by the Cleveland Browns on Thursday.

Though one of the premier talents at wide receiver in the NFL, Beckham had a down year by his lofty standards, logging 74 receptions for 1,035 yards and two touchdowns, with a career low of 64.7 yards per game, according to Pro Football Reference.

It will be interesting to see what becomes of the case, and what it means for Beckham and the Browns.