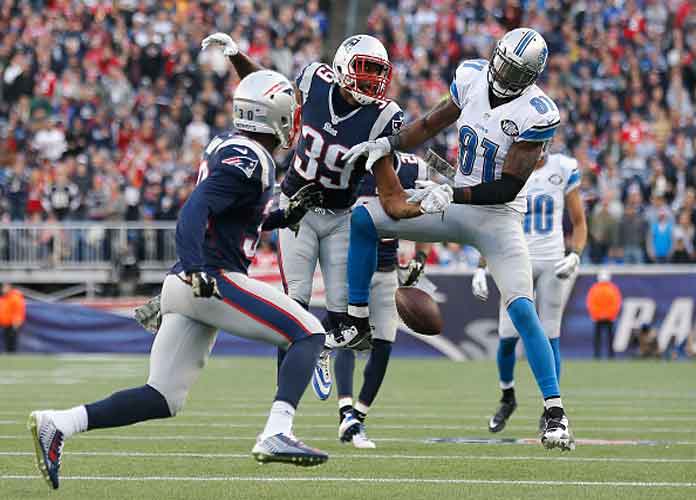 FOXBORO, MA - NOVEMBER 23: Brandon Browner #39 of the New England Patriots breaks up a pass intended for Calvin Johnson #81 of the Detroit Lions during the fourth quarter at Gillette Stadium on November 23, 2014 in Foxboro, Massachusetts. (Photo by Jim Rogash/Getty Images)

Week 3 of the NFL season has arrived. There are 14 big NFL games set for this Sunday, and here is what you need to know.

These teams are similarly matched and both are desperately trying to avoid a 0-3 start. The Texans (0-2) lost two road games, and now they’re coming home to face a Giant’s (0-2) team that’s also struggling. The Texans come into this game with the number one rushing attack in the league at 157.5 yards per game. The Giants’ defense will need to find a way to contain running back Lamar Miller and Deshaun Watson who is one of the most mobile quarterbacks in the NFL.

After stomping out the New England Patriots the Jags (2-0) are on a Payback Tour. Jacksonville has lost four of their past five meetings to the Titans (1-1). There’s a strong case to be made for Jacksonville having the best defense in the NFL. The Jaguars boasts six 2017 Pro-Bowlers and held the Patriots to 10 points by the start of the fourth quarter last week. The Titans’ run defense has allowed 4.9 yards per carry and RB Leonard Fournette might be able to exploit that gap. The Titans’ biggest problem remains their health. Against the Jaguars, they can’t afford to be as hamstrung as they were in Week 2 when they were missing their starting quarterback and top three offensive tackles. This game will depend on Marcus Mariota’s weary elbow against the Jags’ brutish defense.

With QB’s Matt Ryan and Drew Brees going head-to-head, this divisional match up is likely to become a high scoring game. The Falcons (1-1) are looking banged up with the losses of LB Deion Jones, S Keanu Neal, RB Devonta Freeman, and G Andy Levitre. After their loss against Tampa Bay, New Orleans (1-1)  was able to contain the Browns last week and made a lot of improvements offensively. The Saints look like the better team going into this matchup.

The Colts (1-1) bounced back from a season-opening loss to Cincinnati to beat the Redskins in Washington last week in their first victory under new coach Frank Reich. The Eagles (1-1) are also looking to bounce back this week after falling at Tampa Bay last week 27-21. Wentz’s return raises questions for the Eagles as this will be his first game back since tearing his ACL in December. Smart money is on the Colts.

The Bengals (2-0) are off to a surprising start but are going to be without their starting center and running back, which will put more pressure on QB Andy Dalton. The Panthers (1-1) will try to take advantage of this defensively and force everything on Dalton. Carolina is starting to find it’s offensive rhythm despite a tough 31-24 loss at Atlanta last week.

Packers (1-0-1) running back Aaron Jones is back from suspension and could make a big impact on the field. Concerns about the health of Packers QB Aaron Rodgers (knee) still linger. Redskins (1-1) are coming off an ugly performance against the Colts and simply couldn’t stop them underneath crossers, and QB Andrew Luck exploited them all day. Washington has yet to see an offensive juggernaut on par with a Rodgers-led Packers team. QB Alex Smith is completing over 70 percent of his passes, but he doesn’t have the weapons in Washington as he had in Kansas City.

The 49ers (1-1) don’t have the arsenal to keep up with the Chiefs (2-0) in Kansas City’s home opener. San Francisco is coming into this match pretty banged up in the secondary and the Chiefs boast the type of weapons that could create matchup nightmares all over the field. The Chiefs are receiving recognition as perhaps the best team in the NFL at the moment. The Chiefs were very efficient on offense last week; their longest scoring drive clocked in at just 3:57. Kansas City is the popular betting pick at the moment, with its hot new QB Patrick Mahomes currently listed as the second-best passer rating in the NFL (143.3) while QB Jimmy Garoppolo is 26th (77.4).

After blowing the doors off of Buffalo many expect to see Flacco build upon his near-perfect performance in Week 1. The Broncos (2-0) boast a stout defensive front and talented pass-rush. This could present a challenge to Baltimore (1-1) whose offensive line struggled in both runs and pass blocking last week. The Ravens secondary was shredded last week by A.J. Green and Tyler Boyd. Wideouts Emmanuel Sanders and  Demaryius Thomas will try to test the secondary again this week. Undrafted rookie Phillip Lindsay has emerged as a playmaker out of the backfield and could also pose a problem.

Experts are predicting that the Vikings (1-0-1) will win in a blowout. Minnesota is a heavy favorite going into Sunday back home to take on the Buffalo Bills (0-2) and rookie quarterback Josh Allen. To make things worse, the Vikings might get some help on the offensive line this week as center Pat Elflein could make a return from ankle and shoulder surgeries. Still, Allen could impress at quarterback and the Bills could find their groove but it would take an absolute collapse by Minnesota for Buffalo to win it’s first game of the season.

While Miami  (2-0) is looking to stay undefeated, Oakland (0-2) is hoping to score their first win of the season. Miami has more talent than Oakland and that’s why most experts are predicting the Dolphins to go 3-0. Ryan Tannehill has developed a nice rapport with new wideout Danny Amendola and the running back tandem of Kenyan Drake and Frank Gore has worked out nicely so far. Despite their lost to the Broncos QB Derek Carr (29-of-32) is coming in off the most under-the-radar 90 percent throwing day ever.

Dallas, (1-1) who are 12-5 on the road with Dak Prescott, will travel to Seatle this week to play the winless Seahawks. Seattle (0-2) will have middle linebacker Bobby Wagner back Sunday for this must-win home opener. The Cowboys’ offense isn’t much better, but they have a better offensive line and a proven running back in Ezekiel Elliott. Maybe the home crowd energizes the team and that momentum carries a still banged up Seattle team to a win.

Most NFL pundits are picking the Bears (1-1) over the Cardinals (0-2). The Bears are progressing steadily with new head coach Matt Nagy calling the shots on offense and Khalil Mack on defense. Arizona has scored six points all season while giving up 58. The key would be for Arizona to get David Johnson involved in the passing game.

Can Matt Patricia hold his own against Bill Belichick?  The Lions (0-2) have obvious holes in their defense, particularly defending outside runs, and  Belichick & Co. are going to exploit that often. The Patriots’ (1-1) running game was a disappointment in Week 2 and were unable to deliver consistent results. This could be could be the coming-out-party for New England rookie RB Sony Michel. Both teams can’t seem to stop the run, so it may come down to whoever gets it going first. Also, the Pats just got added WR  Josh Gordon to the list of weapons which could allow Brady to rebound in Week 3 in a big way.

Tampa Bay’s offense (2-0) has been on fire. QB Ryan Fitzpatrick has managed to get back-to-back NFC offensive player of the week awards, 819 yards, eight touchdown passes, and a completion percentage of 78.9 percent. Receiver DeSean Jackson has been Fitzpatrick’s’ favorite target, hauling in nine catches for 275 yards. That’s tops in the NFL. Surprisingly the Steelers (0–0-1) are having all sorts of problems lately, especially on the defensive side of the ball allowing a whopping 63 points (31.5 ppg). This past Sunday, the Chiefs were able to torch the Steelers Defense, throwing six touchdowns in a 42-37 loss. Pittsburgh is feeling the absence of Ryan Shazier, while the secondary is missing veteran cornerback Joe Haden.