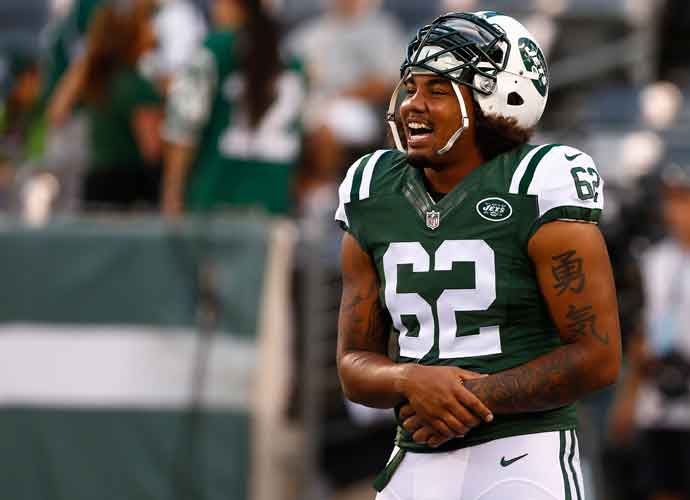 EAST RUTHERFORD, NJ - SEPTEMBER 03: Leonard Williams #62 of the New York Jets laughs on the field before a pre-season game against the Philadelphia Eagles at MetLife Stadium on September 3, 2015 in East Rutherford, New Jersey. (Photo by Rich Schultz /Getty Images)

The New York Jets have had a busy offseason. On top of adding a new head coach and a star player in Le’veon Bell, they also unveiled new uniforms. On Thursday night, they premiered the new look to a crowd of 500 celebrities, former players and current stars.

The designs, which were five years in the making, are the first new jerseys since 1998 for New York. Most notably they feature an all-green helmet. Their home, away, and alternate uniforms, designed by Nike, include a shade of green that was developed exclusively for the Jets called Gotham green.

“It was time for a new Jets.”#JetsNewUnis was a project five years in the making that we documented completely along the way.

“It’s just a different swagger,” said star safety Jamal Adams, one of the seven players who modeled the new uniforms that night. “It’s something this team needed. Obviously, the past years haven’t been going well. To have something new, a fresh start, I think it’s just what we needed.”

The white helmet is gone, replaced by one that includes “JETS” in white letters over the Gotham green. The jersey will feature New York on the chest despite the team practicing and playing their home games in New Jersey.

Jets CEO Christopher Johnson said he considers New York home and wanted the uniforms to reflect that. “Hey, look, I really feel like this is an amazing moment in Jets history,” he said. “No one wins games because of new uniforms. …This is done at a moment when the Jets are changing course in a good way. It’s a good symbol of that change.”

Here’s some of the best tweets about the uniforms:

“Hey can I copy your homework?”

“Yea, just make sure you change it up a bit first”#JetsNewUnis #Jets pic.twitter.com/YDcFF9WAij

A VERY reliable source has shared with me the new logos for the #Jets #JetsNewUnis I really am happy to share them with everyone!! @nyjets pic.twitter.com/V5y0tdSFAI