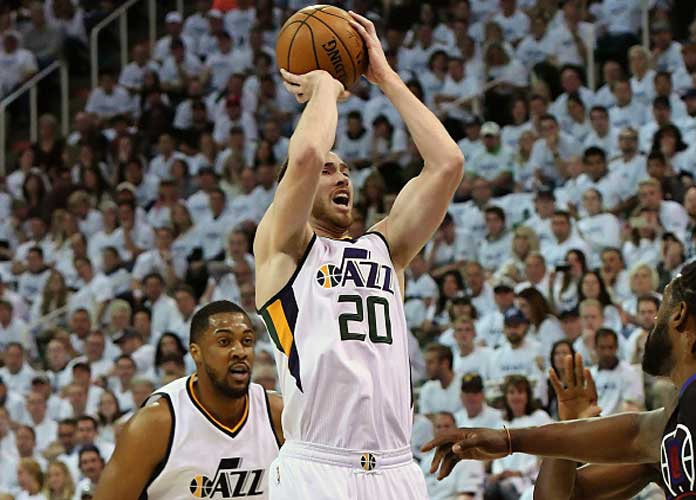 SALT LAKE CITY, UT - APRIL 21: Gordon Hayward #20 of the Utah Jazz shoots the ball in the first half against the Los Angeles Clippers in Game Three of the Western Conference Quarterfinals during the 2017 NBA Playoffs at Vivint Smart Home Arena on April 21, 2017 in Salt Lake City, Utah.

Gordon Hayward delivered a great performance in Los Angeles on Sunday night, finishing with 26 points, eight rebounds and three assists to lift the Utah Jazz to a 104-91 Game 7 victory over the Clippers.

The seventh-year small forward scored 19 points in the second half to help eliminate the Clippers from the first-round Western Conference Series. The Jazz next visit the top-seeded Golden State Warriors, who swept the Portland Trail Blazers 4-0, in Game 1 of the Western Conference semifinals Tuesday night.

Derrick Favors and George Hill contributed 17 points each for Utah, who won its first playoff series since 2010. Favors added 11 rebounds off the bench.

”We’ve been through some pretty hard downs,” said Hayward. ”It definitely feels really good to go from 25 wins to where we were this year making the playoffs, winning a series.”

Nevertheless, advancing to the second round of the postseason came at a cost. Some Jazz players were hampered by injuries this year.

”I was struggling a lot this season with injuries and my teammates had to hold it down for me,” Favors said. ”I felt like I owed them, especially in this game.”

DeAndre Jordan led the Clippers — who were eliminated in the first round of the postseason for the second straight year — with 24 points and 17 rebounds for his seventh double-double of the series. Jamal Crawford added 20 points off the bench.

Chris Paul scored 13 points for Los Angeles, who fell to Portland last year after Paul and Blake Griffin suffered injuries. This postseason, the Clippers missed Griffin again after he sustained a big-toe injury in Game 3.

”It came down to today to keep us afloat, keep us alive,” Paul said. ”We’re done.”

The hosts indeed struggled on Sunday: J.J. Reddick didn’t scored his first 3-pointer until the last 3.5 minutes of the game, which put the Clippers within eight. However, after Los Angeles began scoring more toward the end of the night, they were unable to secure many defensive stops.

Paul was scoreless in the fourth quarter and only managed three assists after injuring his ankle in the third.

The Jazz led by up to 17 points in the fourth quarter. The first six games of their series against the Clippers were decided by eight points or less. Utah and Los Angeles both finished the regular season with 51-31 records.

The Clippers then got hit with a turnover, a delay of game warning and Reddick’s air-ball on a 3-point attempt as the Staples Center crowd went silent.

The only lead Los Angeles held was a one-point advantage minutes into the game, and the Clippers shot just 44 percent and were outscored 56-46 in the paint.

Coach Doc Rivers made it clear he wasn’t going to try to justify his team’s loss in any way.

Austin Rivers started his second consecutive game for the Clippers after missing the series’ first four games due to a strained left hamstring.

Meanwhile, the Boston Celtics defeated the Washington Wizards 123-111 at TD Garden on Sunday to take a 1-0 lead in the Eastern Conference semi-finals. Game 3 is Thursday in Washington.

SALT LAKE CITY, UT – APRIL 21: Gordon Hayward #20 of the Utah Jazz shoots the ball in the first half against the Los Angeles Clippers in Game Three of the Western Conference Quarterfinals during the 2017 NBA Playoffs at Vivint Smart Home Arena on April 21, 2017 in Salt Lake City, Utah.