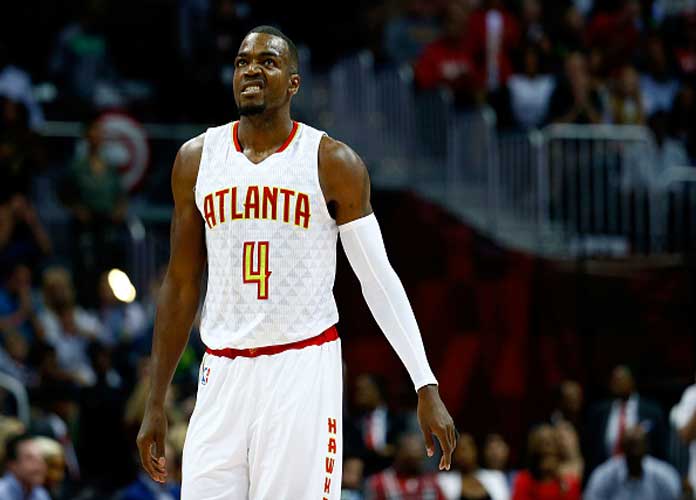 ATLANTA, GA - APRIL 24: Paul Millsap #4 of the Atlanta Hawks reacts to a play during the second quarter against the Washington Wizards in Game Four of the Eastern Conference Quarterfinals during the 2017 NBA Playoffs at Philips Arena on April 24, 2017 in Atlanta, Georgia.

Dwight Howard delivered his best performance of the postseason on Monday night, scoring 16 points, and Paul Millsap overcame a slow start to add 19 points in leading the Atlanta Hawks to a 111-101 home victory over the Washington Wizards.

With the Game 4 win, the Hawks have evened their Eastern Conference first-round series 2-2.

Howard, an eight-time All-Star who did not contribute much the first three games of the NBA playoffs, (18 points on 15 shots) also had 15 rebounds Monday and recorded a double-double by halftime.

Atlanta also received great performances off the bench from Kent Bazemore, who finished with 16 points and seven assists, and Spanish point guard Jose Calderon, who added 10 points and five assists in 20 minutes of play.

Calderon, a 35-year-old NBA veteran who also played in the Spanish league, says he still has some gas left in the tank.

”I always think I’m going to be on the podium,” Calderon said at the post-game press conference. “Just stay ready.”

Denis Schroder, who was scoreless most of the first half after spending the majority of it on the bench, added 18 points for the Hawks, seven of whose starters ended up scoring in double digits.

Calderon was perhaps one of the greatest contributors overall, however, and even Wizards coach Scott Brooks acknowledged it. Atlanta outscored Washington by 29 points when the Spaniard was playing.

”He came in, played well, took care of the game,” Brooks said. ”He’s just a winner. He makes winning basketball plays for whatever team he’s been on.”

Bradley Beal led the Wizards with 32 points to rebound from a terrible performance in Game 3, and John Wall delivered another great showing with 22 points and ten assists. Bojan Bogdanovic was the only other Washington player in double figures besides Otto Porter Jr. (13 points), also with 13 points. Marcin Gortat had 18 rebounds.

This series has been marked by tension: Washington’s Markieff Morris called Millsap “a crybaby.” Game 5 is Wednesday night in D.C.

”We’ve got home court for a reason,” Wall said. ”It’s an opportunity for us to go home, take care of what we need to do and come back here on Friday.”

Howard then came in as Millsap struggled in the first half and Schroder sat on the bench. The center landed huge dunks on back-to-back possessions that made the crowd at Phillips Arena go wild.

Millsap also made a great shot while falling backwards, though he said it was on purpose, as he practiced it as a young boy in Louisiana.

”For all the kids out there, man, you’ve got to practice that in the backyard,” Millsap said. ”Growing up, at my grandma’s house, we played on dirt. We used to shoot fall-away shots like that all the time. Practice those shots. There is a place for those shots.”

With 11 points, Taurean Prince became the first Hawks rookie to reach double-figures in his first four playoff games since Pete Maravich did it in five straight in 1971.

Also on Monday night in Eastern Conference play, the Toronto Raptors beat the Milwaukee Bucks 118-93 in Game 5 to take a 3-2 first-round series lead. Game 6 is Thursday night in Milwaukee.

In the Western Conference, the Golden State Warriors swept the Portland Trail Blazers 4-0 in their first-round series with a 128-103 road victory. Steph Curry scored 37 points, and was 7-for-11 on 3-point shooting Monday.

The Warriors’ second-round opponent has yet to be determined.

ATLANTA, GA – APRIL 24: Paul Millsap #4 of the Atlanta Hawks reacts to a play during the second quarter against the Washington Wizards in Game Four of the Eastern Conference Quarterfinals during the 2017 NBA Playoffs at Philips Arena on April 24, 2017 in Atlanta, Georgia.