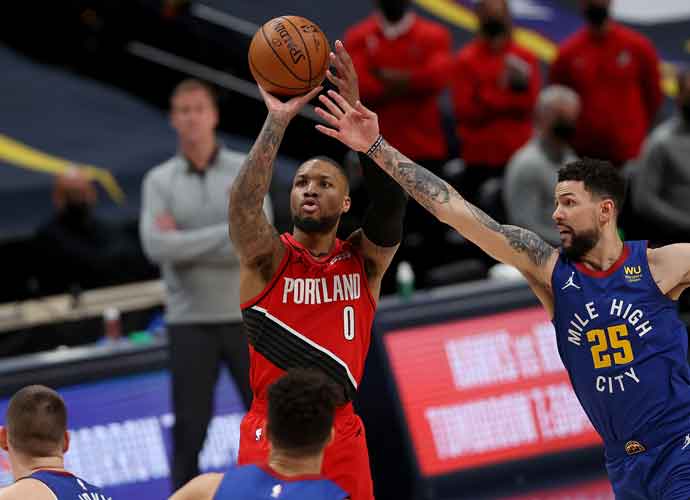 DENVER, COLORADO - JUNE 01: Damian Lillard #0 of the Portland Trail Blazers puts up a shot against Austin Rivers #25 of the Denver Nuggets in the fourth period during Game Five of their Western Conference first-round playoff series at Ball Arena on June 1, 2021 in Denver, Colorado. (Photo by Matthew Stockman/Getty Images)

NBA general managers are working to form a professional association that would collectively support executives with access to legal defense funds.

These steps originated in March and started before the investigation into Portland Trail Blazers president of basketball operations, Neil Olshey, and that situation has further convinced front-office executives of the need for such an association.

Portland’s internal probe has stoked fears that organizations can make decisions to fire top basketball executives for any number of traditional reasons, such as team performance, personality conflicts, differing philosophies, and search simultaneously for ways to pursue “cause” violations in contracts.

On November 6, the Blazers announced they’d hired the law firm O’Melveny & Myers to “conduct a fair and independent review” after a complaint was raised to the organization’s human resources department of “concerns around workplace environment by non-player personnel at the practice facility.” The firm has since interviewed dozens of former and current employees about Olshey and their experiences around the team’s suburban practice facility.

In the nine years of operation of the Blazers, the NBA has received no calls to the league office or its tips hotline alleging workplace complaints against Olshey. The Blazers’ human resources department received no complaints on Olshey until recent weeks.

Olshey has not publicly addressed the current probe into Portland’s workplace environment. The Blazers haven’t suspended Olshey while the investigation is ongoing, and he’s continued to carry out his duties running the team. Once the Blazers elevated the HR complaint to the hiring of an outside firm, the leaguewide belief has been that Olshey’s job and contract are in jeopardy.

Terms like “toxic environment” and “hostile workplace” have been reported by the media and felt to rival GMs as a campaign to trigger a firing for “cause,” presumably a tactic to set up the voiding of the remaining years and salary on Olshey’s contract.

That’s what worries rival executives and has hastened the urgency of finalizing an association that could help support front-office executives in situations like the one unfolding in Portland.

Read more about:
Controversy investigation NBA Portland Trail Blazers
Listen to the uInterview Podcast!
Get the most-revealing celebrity conversations with the uInterview podcast!