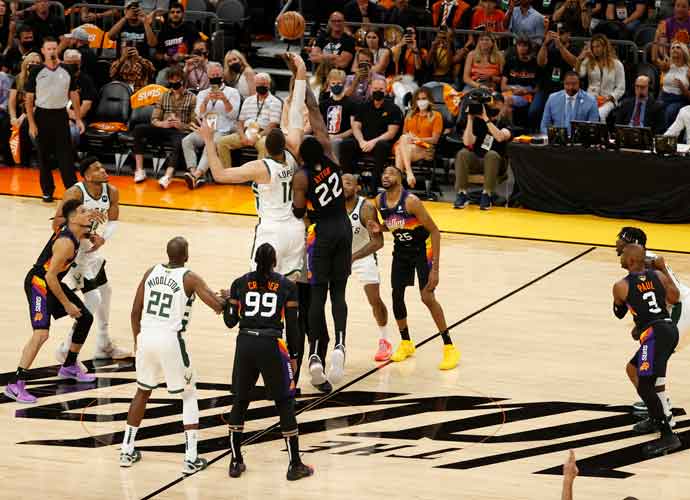 PHOENIX, ARIZONA - JULY 06: Brook Lopez #11 of the Milwaukee Bucks and Deandre Ayton #22 of the Phoenix Suns go up for the tip during the first quarter in Game One of the NBA Finals at Phoenix Suns Arena on July 06, 2021 in Phoenix, Arizona. NOTE TO USER: User expressly acknowledges and agrees that, by downloading and or using this photograph, User is consenting to the terms and conditions of the Getty Images License Agreement. (Photo by Christian Petersen/Getty Images)

The Phoenix Suns took Game 1 at home behind a miraculous effort from Chris Paul, who scored 32 points and dished out nine assists. Giannis Antetkounmpo was not fully healthy and looked noticeably slower as he played through a leg injury that kept him out of the final few games of Milwaukee’s series against the Hawks. Game 2 tips off tonight in Phoenix. Let’s take a look at the spread, moneyline, total and more as we gear up for this pivotal matchup.

CLICK HERE TO GET THE BEST NBA FINALS TICKET DEALS!

Considering they are coming off a 13-point victory, Monty Williams is unlikely to make many adjustments for Phoenix. The offense was brilliant in Game 1 as the Suns utilized the pick-and-roll. Deandre Ayton was phenomenal on both ends of the floor, finishing with 22 points and 19 rebounds. Devin Booker wasn’t that efficient on offense (1-of-8 on three-point shots), however, he did convert all 10 of his free throws and finished with 27 points. If the Suns get similar production out of their trio of stars in Game 2, they will be very difficult to stop.

While the Suns will likely head into Game 2 with the same gameplan they had in Game 1, the Milwaukee Bucks are going to make a ton of adjustments, specifically on the defensive side of the ball. Coach Mike Budenholzer should ask his players to stop switching assignments even when screens are set. The Bucks tried the switching plan in Game 1 and were absolutely burned. Paul and Booker torched Brook Lopez in one-on-one situations all night long. That can’t happen again if Milwaukee wants to even the series. The Bucks also have to remain physical, but not foul nearly as much as they did in Game 1. Phoenix sank 25-of-26 attempts from the charity stripe on Tuesday. The Bucks will have to find a way to play strong perimeter defense without sending the Suns to the line.

Offensively, the Bucks need to get to the foul line more themselves. They only had 16 attempts from the charity stripe in Game 1. Milwaukee also needs to do a much better job finishing inside the paint. According to NBA Advanced Stats, the Bucks shot just 13-for-24 (54.2%) within five feet of the rim in Game 1. During the regular season, they averaged 19.3 field goal makes on 29.3 field goal attempts (66.1%).

Overall, it will be very interesting to see the adjustments that each team makes ahead of Game 2. Obviously, the health of Antetkounmpo is critical for Milwaukee, but even if he is not feeling 100 percent healthy, we all know he will be on the court, which is valuable in and of itself. And don’t forget about Khris Middleton and Jrue Holiday; they were phenomenal in the former MVP’s absence against the Hawks in the Eastern Conference Finals.

Prediction: The Bucks cannot afford to fall two games down in this series. Budenholzer has one of the most brilliant minds in the NBA and I believe that he will find a way to make the necessary changes to not only cover the 5.5-point spread but also to steal Game 2 on the road.

CLICK HERE TO GET THE BEST NBA FINALS TICKET DEALS!