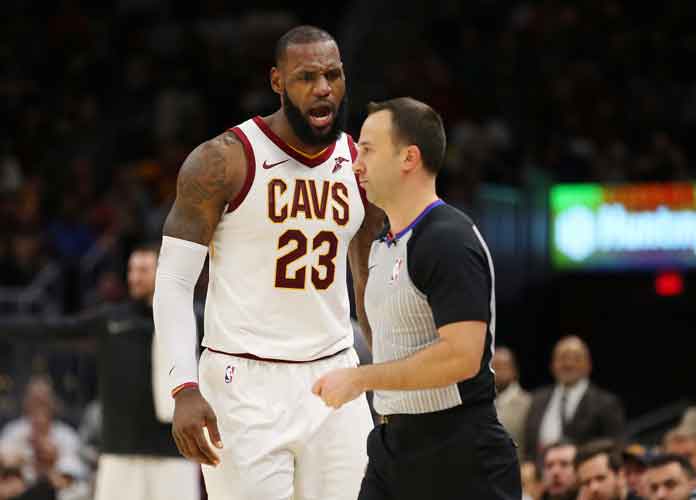 CLEVELAND, OH - NOVEMBER 28: LeBron James #23 of the Cleveland Cavaliers argues after being ejected in the second half by referee Kane Fitzgerald #5 while playing the Miami Heat at Quicken Loans Arena on November 28, 2017 in Cleveland, Ohio. Cleveland won the game 108-97. NOTE TO USER: User expressly acknowledges and agrees that, by downloading and or using this photograph, User is consenting to the terms and conditions of the Getty Images License Agreement. (Photo by Gregory Shamus/Getty Images)

For the second straight year after the NBA implemented a drafting style for the All-Star game, LeBron James and Giannis Antetokounmpo were named captains for receiving the most votes from fans and proceeded to make their picks live on TNT Thursday night.

James honored his late friend and Laker legend Kobe Bryant by wearing a black sweatshirt with two hearts including a yellow one with Bryant’s No. 8 and No. 24 inside it and a No. 2 inside a white heart representing Bryant’s daughter Gianna. The 16-time NBA all-star went first and selected his teammate Anthony Davis and Antetokounmpo ended up taking Sixers’ center Joel Embiid with the second pick.

Prior to the draft TNT’s Charles Barkley joked with James about “tampering’ when he drafted Davis the year before. James laughed and said, “Listen, those guys [the Bucks] are 80 and 0 right now. We don’t need them to get another guy on their team.”

The two captains went back and forth first selecting the starters for their respective teams. James seemed to have the better lineup at least on paper as he drafted Kawhi Leonard, Luka Doncic and James Harden. The “Greek Freek” constantly referred to a notebook with names on it and ended up with Pascal Siakam, Trae Young and Kemba Walker to join himself and Embiid on February 16 at the All-Star game in Chicago.

While Antetokounmpo was trying to make a choice between Harden, Young and Walker, Barkley comically interrupted, “You don’t want the dribbler?” referring to Harden. Antetokounmpo smiled back and responded, “I want someone who is going to pass.”

Antetokounmpo and James announced the charities their respective teams will be donating to in Chicago. James will be supporting Chicago Scholars and Antetokounmpo will support After School Matters. Bryant and his daughter will be honored as Team Giannis will wear no. 24 and Team LeBron will wear No. 2. The new format will also showcase each quarter as a mini-game for charity before an un-timed quarter with a target score that will decide the winner. The target number will be the amount scored by the team in the lead during the first three quarters combined plus 24, paying tribute to the number Bryant wore for the second half of his career.