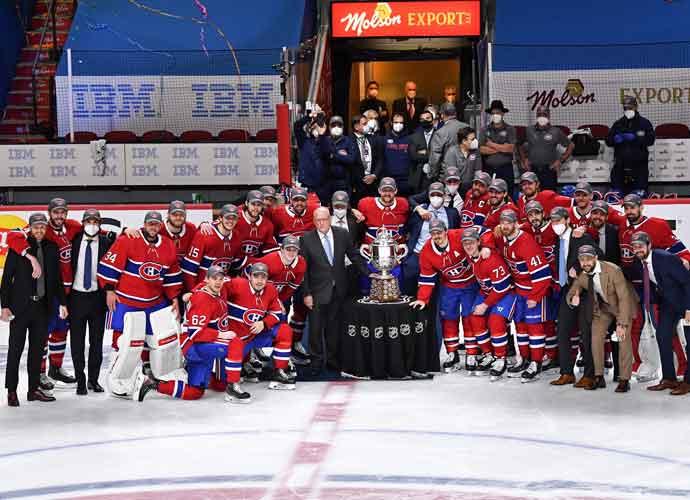 MONTREAL, QUEBEC - JUNE 24: The Montreal Canadiens pose with the Clarence S. Campbell Bowl after defeating the Vegas Golden Knights 3-2 during the first overtime period in Game Six of the Stanley Cup Semifinals of the 2021 Stanley Cup Playoffs at Bell Centre on June 24, 2021 in Montreal, Quebec. (Photo by Minas Panagiotakis/Getty Images)

The contract carries a $3.85 million cap hit along with a limited no-trade clause each year, according to reports.

Allen’s current contract comes with a cap charge of about $2.86 million – meaning the boost will take effect following the 2022-2023 season.

The move to extend the 32-year-old comes as uncertainties remain with six-time all-star goaltender Carey Price.

Price has been dealing with a lingering knee injury and could miss the rest of the season.

“We don’t expect Carey to be available for the start of the season. Quite frankly, I don’t know that there is a path for Carey to return this season through the rehab process,” general manager Kent Hughes said, according to Global News.

“This summer, he went through the process of a shot to the knee, seeing if that would help. It did not,” he added.

Huges also said that if Price is going to play again he will need surgery.

Meanwhile, the Canadiens have been in rebuild mode.

In the past year, the organization, led by Hughes and executive vice president Jeff Gorton, has ramped up the process of acquiring draft picks and young players.

Before the trade deadline in the past season, the Canadiens acquired a first-round pick in exchange for defensemen Ben Chiarot.

At the draft, it traded a 2022 first and third-round pick for 2019 third-overall pick Kirby Dach.

And in August, the Canadiens acquired a first-round pick from the Calgary Flames to take on the contract of Sean Monahan, who carries a cap charge of about $6.38 million.

Plus, the Canadiens had the first overall pick in the 2022 draft and selected Slovakian winger Juraj Slafkovsky.

The Canadiens will play a few more preseason games before taking on the Toronto Maple Leafs on opening night on October 12.

Read more about:
Carey Price Jake Allen Montreal Canadiens
Listen to the uInterview Podcast!
Get the most-revealing celebrity conversations with the uInterview podcast!

New York Rangers Are The Most Valuable NHL Team