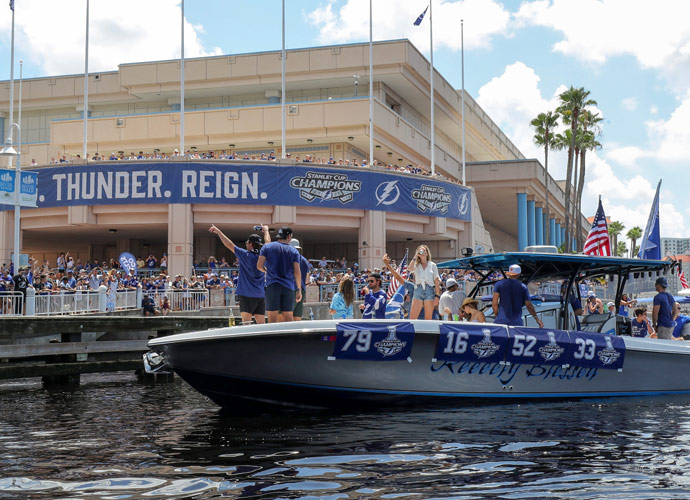 The Tampa Bay Lightning‘s celebrations after their second consecutive Stanley Cup victory resulted in a damaged trophy. The incident occurred during Tampa Bay’s boat parade, resulting in the trophy being sent north to Montreal for repair.

The 128 year-old trophy has been damaged before such as in 2018 when the Washington Capitals did “cup stands” while celebrating their first-ever Stanley Cup in franchise history. The cup is believed to be ready for the players’ summer of Stanley, a summer full of celebration with the cup that they were unable to enjoy after their last championship win due to the pandemic.

The ⁦@StanleyCup⁩ did sustain some damage during today’s festivities. It’ll be sent to Montreal for repairs and be back to resume Cup celebration with ⁦@TBLightning⁩ next weekend pic.twitter.com/MEbZGZFxSD

The Lightning’s second boat parade in 10 months showcased the city’s desire to celebrate. Unlike the first parade, the global pandemic’s burden was nonexistent, allowing thousands of fans to gather.

This years parade took place five days after the Lightning’s series victory versus the Montreal Canadiens, which took just five games. The scene was the opposite of last year’s celebration as the team no longer had to play in front of an empty arena due to Covid-19 restrictions.

Fans enjoyed the parade on their own boats/watercrafts and received an up-close view of the boats carrying Lightning players and coaches. Celebrations downtown were delayed for over an hour as a massive thunderstorm traveled through the area. Lightning owner, Jeff Vinik, as well as the players, took the podium eventually to address the fans, even in the poor weather conditions.

The excitement within the team was on full display despite the conditions, as Yanni Gourde slid across the stage and coach Jon Cooper joined players in interacting with the fans.

Playoff MVP Andrei Vasilevskiy got a rise out of the drenched crowd when he thrust the Conn Smythe Trophy onto his head.

The parade marked the third time in 10 months that Tampa Bay was able to celebrate a professional sports championship, utilizing a special parade system designed to allow the Lightning and Tampa Bay Buccaneers a method to celebrate their accomplishments with fans during the pandemic.

The Buccaneers celebrated with thousands of fans downtown five months ago after winning their first Super Bowl in 18 years. The celebration taking place in February was a dream come true after the team’s phenomenal performance led by Tom Brady.

The Buccaneers’ parade also involved excitement with the trophy as Brady shocked the fans by throwing the Lombardi Trophy from one boat to another.

R. Kelly Sentenced To 30 Years In Prison For Sex Trafficking Of Minors

Travis Barker Hospitalized With Unspecified Medical Episode, Wife Kourtney Kardashian By His Side

Trump Tried To Grab Steering Wheel From Secret Service Agent To Force Him To Go To Capitol On Jan. 6