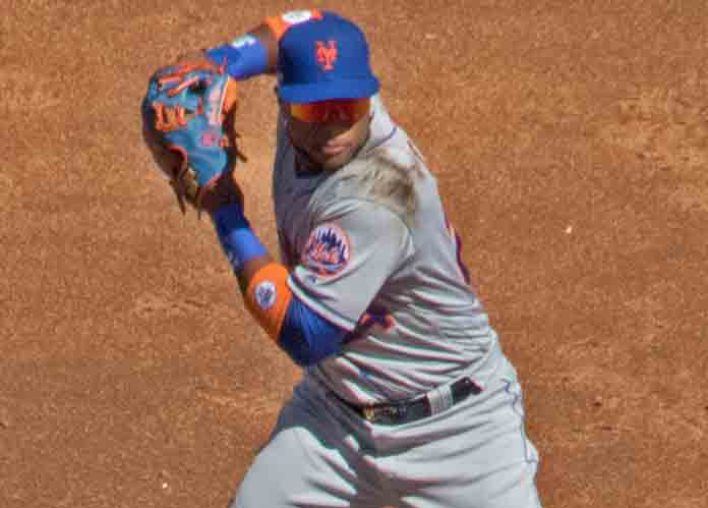 Robinson Cano with the New York Mets in 2019 (David B. King/Wikipedia)

With 320 home runs, New York Mets second basemen Robinson Cano could essentially fill a up a book with all his home runs so far during his 14-year career.

Cano, unable to ever add three pages to his “book” at once until last night, finally accomplished that feat, rocking three home runs during a game against the San Diego Padres.

Cano, 36, ignited his fireworks display after slapping a change-up into right field to push the Mets out to a 1–0 lead. After digging in for his second at–bat, Cano sat back on a curve ball, waiting for it to break before connecting with a massive cut, sending that ball into the right-field seats as well. The following inning, Cano lifted one more into the seats, clubbing a 418–foot bomb that also scored rookie sensation Pete Alonso. The blast gave the Mets a 5–0 lead, and eventually a 5–2 victory, as Cano stood responsible for all runs scored by New York during the affair.

Cano’s increasing age surrounded his accomplishment with even further applause, as although the 36–year old remains an appreciated MLB talent, his best playing days exist only in the rearview mirror. His home run triad also ended a 99-game drought in which Cano failed to get on base, something that certainly helped in relieving some pressure off the veteran’s shoulders with fashion.

After the game Cano jokingly stated, “Hopefully things turn around from here so you guys don’t kill me in the paper anymore.”

Although the New York media indeed continues to bash Cano for his lackluster play since singing with the Mets this winter, Mets skipper Mickey Callaway expressed his ongoing faith in Cano even with all the noise.

“We were seeing signs of it early, when he was hitting the ball hard but hitting it right at people,” said Callaway of Cano. “Then he went through that period where the ground balls started finding holes, and now he’s driving the ball. You could see the power and the stroke coming.’’

While the Mets only exist as an afterthought at this point, as they sit several games outside the playoff picture, their crosstown rivals, the New York Yankees, hold the league’s best record, Cano’s recent resurgence at least offers fans something to watch as they move along with another subpar season.