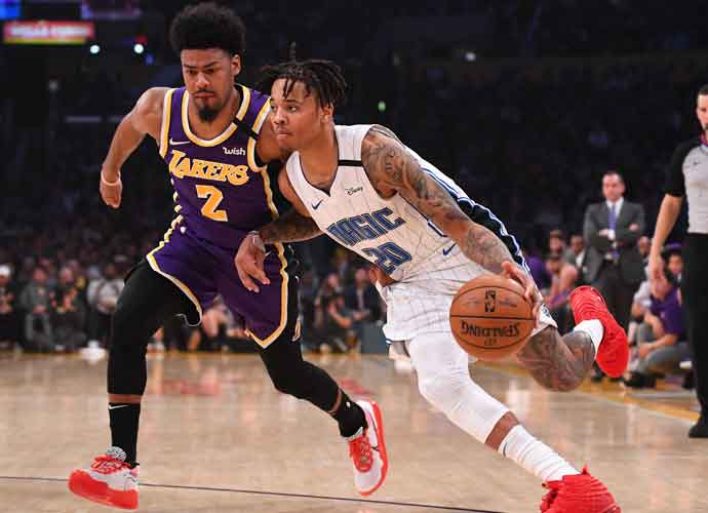 LOS ANGELES, CA - JANUARY 15: Quinn Cook #2 of the Los Angeles Lakers guards Markelle Fultz #20 of the Orlando Magic as he drives to the basket in the first half of the game at Staples Center on January 15, 2020 in Los Angeles, California.

Markelle Fultz, the number one overall pick of the 2017 NBA draft, posted a triple double of 21 points, 11 rebounds and 10 assists to lead the Orlando Magic to a thrilling 119-118 victory over LeBron James and the Los Angeles Lakers. Orlando’s Aaron Gordon added 21 points, while James posted 19 points and 19 assists in the defeat, though the Lakers were outscored by nine points when he was on the floor.

Los Angeles had been red hot, entering Wednesday’s game riding a nine-game winning streak, but the stellar all-around play of Fultz ensured that Los Angeles would not win its tenth straight. Fultz, who was traded to Orlando from Philadelphia last season, seems to finally be capitalizing on the immense talent which led to his lofty draft position, posting a career-best 11.7 points and 4.6 assists, to go along with 3.4 rebounds per game. Most importantly, the Magic guard has played in 40 of a possible 41 games, after struggling to stay on the court with nagging injuries in his first two campaigns. The Magic’s win pushed their record to 20-21, good for 7th place in the Eastern Conference, which is proving to be more competitive than in years past.

While the game looked to be a blowout in the making, with Orlando holding as big as a 21 point lead, the Lakers battled their way back into it on the backs of James and guard Quinn Cook, who finished with 22 points, knocking down four three-pointers on seven attempts. With the Magic holding a slim lead late in the 4th quarter, Fultz notched two clutch buckets in the final minute of the game, while James missed a three-pointer that could have tied it for Los Angeles. The loss dropped the Lakers’ record to a still-outstanding 33-8, which is tops in the Western Conference.

While the two teams occupy very different positions in the standings, Orlando managed to pull it out on Wednesday, with Fultz’s career reawakening quickly becoming one the nicest stories to watch in the 2019-20 NBA season.