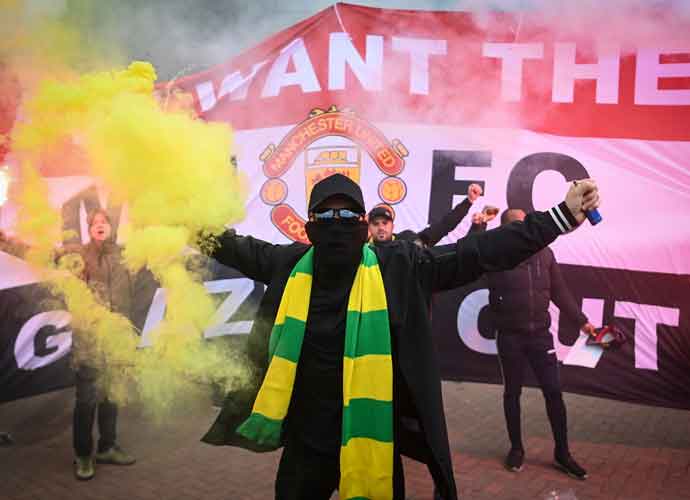 MANCHESTER, ENGLAND - MAY 02: Fans are seen protesting Manchester United's Glazer ownership outside the stadium prior to the Premier League match between Manchester United and Liverpool at Old Trafford on May 02, 2021 in Manchester, England. Sporting stadiums around the UK remain under strict restrictions due to the Coronavirus Pandemic as Government social distancing laws prohibit fans inside venues resulting in games being played behind closed doors. (Photo by Getty Images/Getty Images)

Manchester United fans have not forgotten what the team owners Joel and Avram Glazer tried to do with the failed European Super League.

For fans, it’s been repeated built-up frustration with the team and how it’s run that fueled distrust with the Glazer family’s ownership. The club used to be debt-free until the Glazers took ownership of the team in 2005. The Glazers were able to complete a takeover using borrowed money, but once they got ownership of the team, the borrowed money became debt for the team. The team went from being debt-free to £540 million in debt.

That was one of the long-standing frustrations fans had with the team, but it subsided when Manchester United captured multiple league titles after the takeover. The success ended once manager Alex Ferguson retired in 2013. Manchester United has not had success since 2013, which was another reason for fan frustration.

The announcement was met with condemnation by the leagues, fans and politicians. Pressure forced multiple teams to withdraw from the European Super League. Manchester United was one of the first members to withdraw, and the league was suspended after the majority of members left.

Fans had enough and took the opportunity to storm Old Trafford, the stadium where the team plays. On Sunday, ahead of the team’s game against Liverpool, fans staged a protest against the Glazer’s ownership of the team outside of Old Trafford. A huge crowd of protestors gathered and were able to enter the stadium to continue their protest.

Manchester United fans have stormed Old Trafford in protest against their owners pic.twitter.com/8XExeHwdfq

The fans protest continues outside, and inside, Old Trafford. Manchester United are due to play Liverpool here in less than two hours. WARNING: Strong language pic.twitter.com/tzULBeOjgu

The protest caused the Premier League to postpone the game.