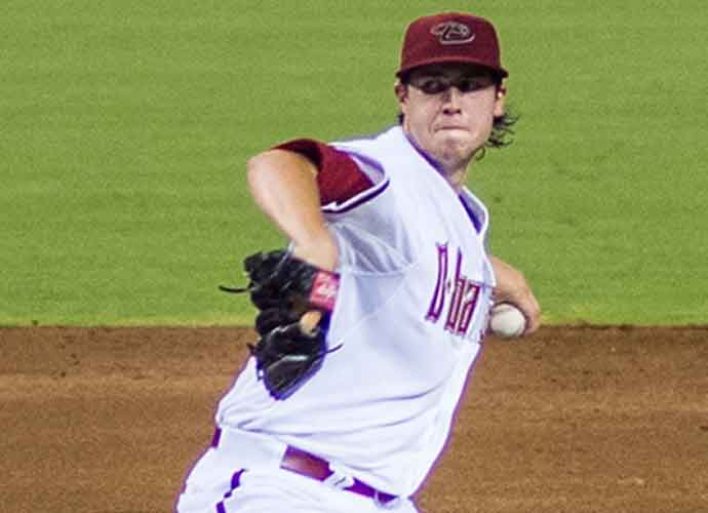 Emotions expectedly ran high for the Los Angeles Angels Tuesday night as the team played their first game since teammate, Tyler Skaggs, tragically passed away at 27 age this week. Although the Angels gathered themselves to put together a 9–4 over the Texas Rangers, nothing overshadowed what was a night entirely dedicated to Skaggs’s memory.

Three–time MVP winner Mike Trout lead the team, as he always does, bravely issuing an emotional post–game statement about his late teammate and friend while also detailing his thoughts throughout the game’s course. Other players and coaches soon followed Trout, as multiple Angels who knew Skaggs well spoke on the matter, with most eventually tearing up.

An emotional Angels star Mike Trout: “My first at-bat, I get up there, and all I do is think about him.”#TylerSkaggs pic.twitter.com/wN3UeQhUho

Skaggs was found unresponsive and declared dead just prior to the team’s Monday game agains the Rangers. What exactly caused Skaggs’s death remains undetermined with the investigation ongoing. The league wasted no time addressing the situation, quickly cancelling the game soon after the news broke. Although the team played the following day, no pregame music, lineup hype, or fireworks took place as the players just looked to get through what was likely the most difficult game of each of their careers. The game did add a moment of silence, as both teams trotted out to honor Skaggs, with Angels players holding onto his jersey along the way. “We wanted to take him out there with us one more time,” said teammate Andrew Heaney.” The pitcher’s mound also paid tribute to Skaggs, with his #45 inked into the dirt.

The Rangers felt compelled to honor Skaggs’s to their best ability as the game’s host, also refraining from celebratory practices while still giving their opponents a fair and competitive game. Rangers manager Chris Woodward commented after the game as he stated, “It felt different, there’s no doubt. But we felt like that was the right thing to do for them. To not make it too much hoopla in the game.” Other players across the game commemorated Skaggs as well. Patrick Corbin, Skaggs’s best friend, wore #45 during his start for the Washington Nationals, giving up one ER over seven innings while doing so. Other ballparks both Wednesday night and Tuesday night held their own individual moments of silence to honor Skaggs as well.

Patrick Corbin threw 7 innings, struck out 7, and gave up only 1 run.

All while wearing Tyler Skaggs’ No. 45 🙏 pic.twitter.com/Cz4xhIW1rU

A moment of silence for @Angels pitcher, Tyler Skaggs. pic.twitter.com/XjaqMc3ox2

It is with heavy hearts that we take the field tonight following the passing of Angels pitcher Tyler Skaggs. Our thoughts this evening are with his wife Carli, his family and friends, the Angels and all who mourn his passing. pic.twitter.com/v5YgpzBqFx

The Angels plan to add a #45 patch to their jerseys ahead the season’s second portion, keeping their late teammate beside them as they try and move forward from this unfortunate tragedy.