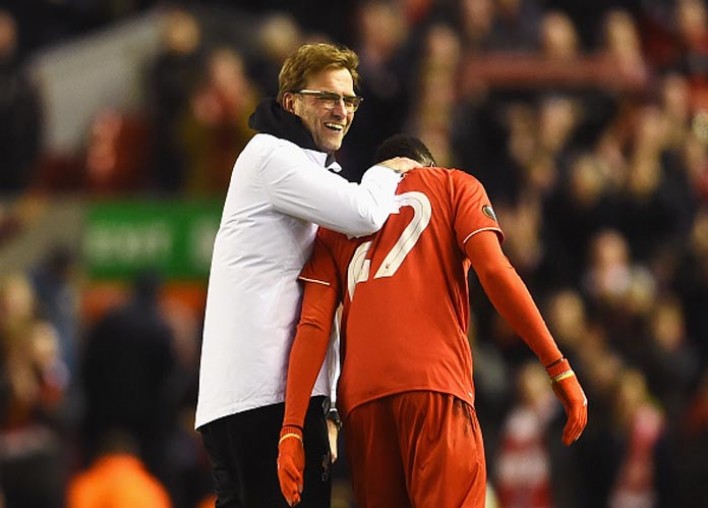 Caption:LIVERPOOL, ENGLAND - MARCH 10: Jurgen Klopp, manager of Liverpool celebrates victory with Divock Origi of Liverpool after the UEFA Europa League Round of 16 first leg match between Liverpool and Manchester United at Anfield on March 10, 2016 in Liverpool, United Kingdom.

Thursday’s Manchester City loss to Chelsea 2-1 ultimately had a lot more riding on it than anyone thought. With the loss, Man City was officially ‘eliminated’ from the English Premier League Title, meaning that Liverpool were crowned champions of the EPL for the first time in the club’s history. The championship was Liverpool’s first English soccer title since 1990.

Manchester City needed at least a win on Thursday to remain in the hunt for the EPL title following Liverpool’s 4-0 win Wednesday against Crystal Palace.

Liverpool’s manager Jurgen Klopp can receive a lot of the credit for leading this team to victory, but he gives a lot of praise to his players. “I’m nothing without my coaches and I’m even less without my players. Without the players buying in, I have no chance. We will not stop. The boys are in a good age group and we need to use that as much as we can. The others will do a lot to improve their situation – it’ll be a hard fight, but that’s how the Premier League is.”

Winning the title was historic already, but the way Liverpool did it was truly historic, breaking numerous records along the way and having the potential of breaking more.

There are numerous other records that Liverpool can ink their names too with seven matches remaining in the EPL season. Regardless of whether or not they do get those records, one cannot deny that Liverpool had arguably one of the best single seasons by a Premier League team in history.