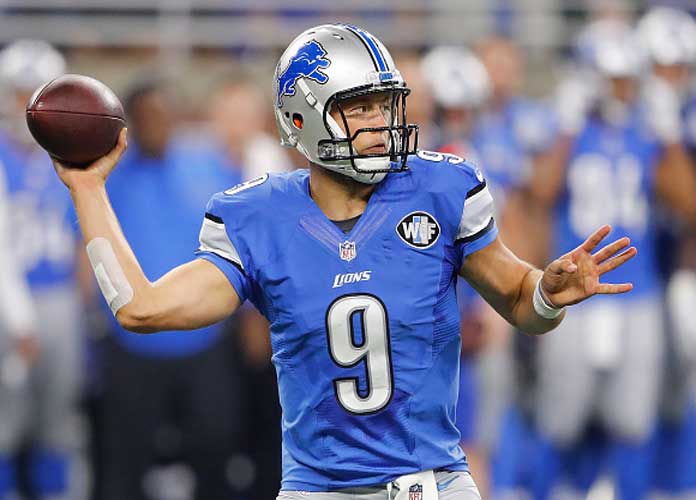 DETROIT, MI - OCTOBER 16: Matthew Stafford #9 of the Detroit Lions looks for a receiver against the Los Angeles Rams during first half action at Ford Field on October 16, 2016 in Detroit, Michigan. (Photo by Leon Halip/Getty Images)

The Pro Bowl signal-caller did not attend practice Wednesday or Thursday due to a back injury that sidelined him from Sunday’s 20-13 loss to the Chicago Bears. According to NFL Network Insider Ian Rapoport, Stafford is suffering from tiny fractures in his back, similar to the type of injury that Tony Romo sustained during the 2016 preseason. Stafford is also dealing with hip problems, according to NFL.com. Lions coach Matt Patricia said the QB was considered day-to-day ahead of Detroit’s home matchup against the Dallas Cowboys on Sunday. Should Stafford miss that game as well, Jeff Driskel is expected to make his second start for the team. In the loss to the Bears, the fourth-year backup QB finished 27-of-46 for one touchdown and one interception.

It’s important to note that Stafford’s injury is more of a re-aggravation than a new impediment. Last season, the QB injured his back in a Week 13 matchup against the Los Angeles Rams.

The iron man himself, Matt Stafford will not play today due to his surprise back injury https://t.co/nBNBthPHvm

Stafford has also garnered significant attention this week because the NFL is investigating how the Lions handled reporting his back injury in the lead-up to the game against Chicago. The QB had been labeled as “questionable” but was was ultimately ruled out just hours before the matchup began. Stafford told ESPN he believes him sitting out against the Bears was ultimately the correct decision and that he was happy to allow Driskel to replace him for the matchup.

Stafford was also nominated for a sportsmanship award on Thursday: