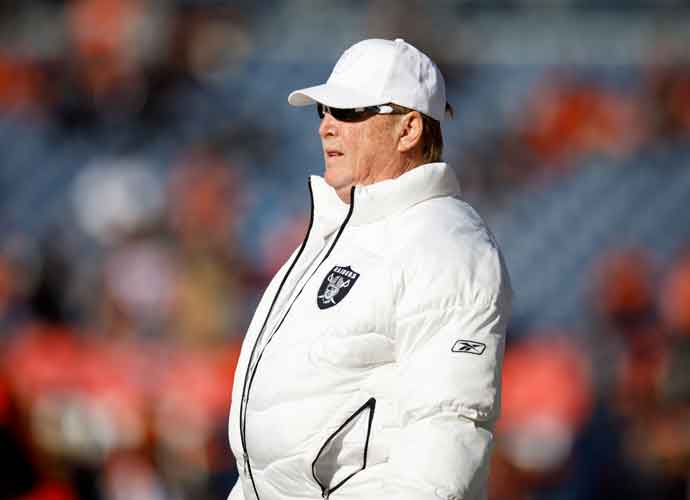 DENVER, CO - DECEMBER 29: Owner Mark Davis of the Oakland Raiders stands on the sidelines before the game against the Denver Broncos at Empower Field at Mile High on December 29, 2019 in Denver, Colorado. The Broncos defeated the Raiders 16-15. (Photo by Justin Edmonds/Getty Images)

The Las Vegas Raiders were on the brunt of controversy following their tweet in regards to Derek Chauvin‘s trial.

Chauvin is a former Minneapolis police officer convicted of murdering George Floyd. Floyd died on May 25, 2020, after Chauvin held his knee against the handcuffed Floyd’s neck for nine minutes. Floyd repeatedly said that he could not breathe. On Tuesday, Chauvin was convicted of second-degree unintentional murder, third-degree murder, and second-degree manslaughter.

Immediately after the conviction, the NFL and the teams released statements regarding the conviction. “Today’s outcome in the Derek Chauvin trial in Minneapolis does not undo the loss of life. Mr. George Floyd should be here with us today,” the statement said. “Our hearts remain with the Floyd family, and we understand the pain, anger, and frustration does not go away even when justice is delivered.”

“Importantly, even as we identify reasons for hope, we must continue to help move our society toward a more equal and just tomorrow,” the league said. “We are proud to partner with NFL players and clubs and remain committed to do the important work needed to make positive change in our society.”

As other teams released a statement regarding the conviction, the Raiders did something else that sparked controversy. The team released a photo with the words, “I can breathe,” and the date.

The photo was met with criticism by Los Angeles Lakers superstar LeBron James, who was vocal about it. James retweeted the Raiders tweet and wrote, “This is real???? Nah man this ain’t it at all,” the retweet said. “The F^%K!!!!”

Raiders owner Mark Davis defended the team’s social media post and said that it came from Floyd’s brother, Philonise, who said, “Today, we are able to breathe again.” Davis also offered an apology in case the Floyd family was offended. “If I offended the family, then I’m deeply, deeply disappointed,” Davis said.