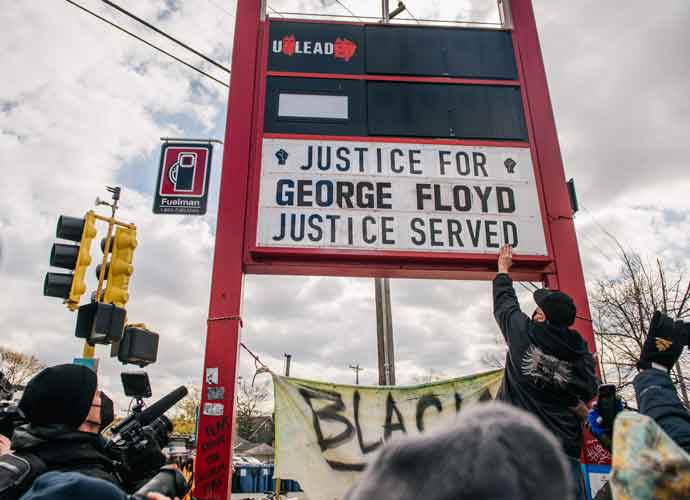 MINNEAPOLIS, MN - APRIL 20: People celebrate the guilty verdict in the Derek Chauvin trial at the intersection of 38th Street and Chicago Avenue on April 20, 2021 in Minneapolis, Minnesota. Chauvin, a former Minneapolis, Minnesota Police officer was found guilty of all three charges in the murder of George Floyd. (Photo by Brandon Bell/Getty Images)

Former Minneapolis police officer Derek Chauvin was found guilty of second-degree unintentional murder, third-degree murder and second-degree manslaughter by a jury on Tuesday afternoon. He was convicted based on his actions and role in the murder of George Floyd last year outside a convenience store.

Floyd’s death in the May of 2020 sparked a massive movement. The death of Floyd, who was Black, and the video that showed a white cop kneeling on Floyd’s neck for about nine minutes was excruciating and painful to watch. Anyone who watched that video literally watched a murder. However, the moment also became a turning point in the United States. It sparked a racial and social justice movement, with athletes and influential people in the sports world speaking up more than usual.

“One year ago, George Floyd was murdered, causing unimaginable pain and trauma for his family, the Minneapolis community, and communities across the nation,” the Minnesota Timberwolves and Minnesota Lynx said in a joint statement. “Our deepest thoughts have been with the Floyd family since this unjust tragedy. Throughout our history, racial and social inequalities have been ingrained in our society.

“We are hopeful that today’s decision will serve as a step forward, but it does not ease the physical and emotional pain that continues in an environment where systemic racism exists.”

Floyd’s death prompted athletes to speak up about social and racial injustice. Former NBA player Stephen Jackson traveled to Minnesota last summer the week that Floyd was murdered. Jackson had been a long-time friend of Floyd. “I’m hurt, I’m angry, but I ain’t scared,” Jackson said during a very moving speech with Okogie and fellow T-Wolves player Karl-Anthony Towns by his side.

After such an emotional roller coaster, many believe that justice has finally been served. On Tuesday, LeBron James tweeted one simple world: “ACCOUNTABILITY.”

The NBA and National Basketball Players Association issued a joint statement Tuesday. “We are pleased that justice appears to have been served” while also adding that “there is much work to be done.” The WNBA said the verdict was “a step toward justice.”

The following was released by the WNBA. pic.twitter.com/KWF4mkr6mf

Atlanta Hawks interim head coach Nate McMillan expressed doubts about whether his Hawks would have even suited up against the Magic Tuesday night had the verdict been different.

“We, as a league, we really didn’t know if we were going to play this game,” McMillan said. “I feel that the jury did their jobs. You got to hold everybody accountable for their actions. The jury found him guilty on all three charges. I thought they did their jobs.”

Individuals and representatives of teams and leagues spoke out about Tuesday’s verdict all over social media.

On May 25, 2020, George Floyd was murdered when Minneapolis police officers responded to a call about a possible forgery at a convenience store. As officers tried to place Floyd under arrest and place him in the squad car, he tried to tell them that he was claustrophobic. That is when he ended up face-down in the street, handcuffed, with a white police officer’s knee on the back of his neck.

“I can’t breathe,” was muttered multiple times by Floyd before eventually going limp. Floyd was then taken to the hospital where he was pronounced dead. He was 46 years old.