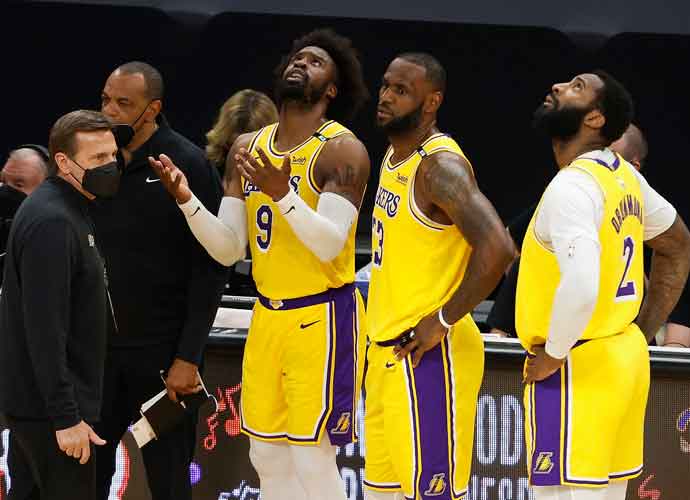 PHOENIX, ARIZONA - JUNE 01: Wesley Matthews #9 of the Los Angeles Lakers reacts to a replay of his foul on Chris Paul (not pictured) of the Phoenix Suns during the second half in Game Five of the Western Conference first-round playoff series at Phoenix Suns Arena on June 01, 2021 in Phoenix, Arizona. NOTE TO USER: User expressly acknowledges and agrees that, by downloading and or using this photograph, User is consenting to the terms and conditions of the Getty Images License Agreement. (Photo by Christian Petersen/Getty Images)

Lakers On Brink Of Elimination Following Game 5 Beatdown From Suns

The Phoenix Suns are one win away from eliminating the Los Angeles Lakers from the playoffs.

On Tuesday, the Suns thrashed the Lakers in a 115-85 win to push the defending champions to the brink of elimination. The Suns’ offense easily battered the Lakers during the game, outscoring them by 22 points in the second quarter. The Lakers were only able to score 10 points as a team in the second frame, while Phoenix scored 32 points in the same quarter to widen their lead. The leading scorer for the Suns was Devin Booker, who finished the night with 30 points.

For the Lakers, it was one of their most horrendous games ever. The team was already down All-Star Anthony Davis, who was sidelined for Game 5 due to a strained groin. That left LeBron James as the lone All-Star on the team. Los Angeles attempted to rely on James, but it just wan’t enough. The Lakers as a team put on one of the poorest performances in playoff history.

Dennis Schroder went 0-for-9 in the game for zero points. Alex Caruso, Wesley Matthews and Ben McLemore combined to shoot 3-for-18. James finished with 24 points on 9-for-19 shooting along with seven assists. 17 of James’ points came in the third quarter. The Lakers as a team only shot 34.5% from the field and 34.3% from beyond the arc.

“We got our a-s kicked. It’s just that simple,” James said after the game. “They got to whatever they wanted to get to in this game. We got to be better, obviously, if we want to force a Game 7.”

Los Angeles will now prepare for Thursday’s Game 6, which is a must-win for the organization. James will be prepared to play with the mindset that Davis will still be sidelined.

“My mindset is that he’s not gonna be able to play in Game 6. That’s my mindset,” James said. “And if something changes, then we go from there. But I’m preparing as if he’s not.”

Los Angeles will want to avoid becoming the sixth defending champions in league history to lose in the first round of the playoffs the following season. Thinking about the beatdown they received in Game 5 might provide the proper motivation to prevent an early postseason exit. “I think we just got our ass kicked. We got disrespected out there,” Kyle Kuzma said. “So I think that should be enough to give us some [motivation].”