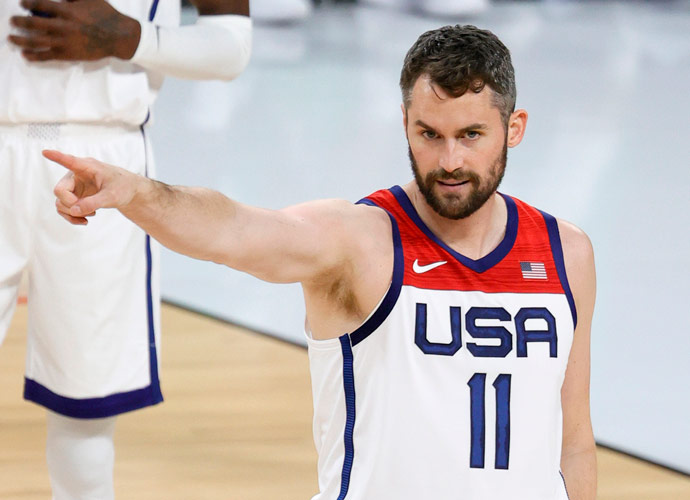 LAS VEGAS, NEVADA - JULY 10: Kevin Love #11 of the United States reacts after getting called for a foul during an exhibition game against Nigeria at Michelob ULTRA Arena ahead of the Tokyo Olympic Games on July 10, 2021 in Las Vegas, Nevada. Nigeria defeated the United States 90-87. (Photo by Ethan Miller/Getty Images)

According to a newly released report from his agent, USA forward Kevin Love is withdrawing from the team traveling to Tokyo in a few weeks for the Olympic Games. JaVale McGee and Keldon Johnson will be filling the open spots on the 12-man roster.

Love spent 10 days with Team USA preparing for the Olympic Games in Las Vegas. Love is still rebounding from a calf injury he sustained that minimized his playing time this year in the NBA. In total, Love missed 45 games. “I am incredibly disappointed to not be heading to Tokyo with Team USA, but you need to be at absolute peak performance to compete at the Olympic level and I am just not there yet,” Love said in a statement.

Love has played a significant role in Team USA’s success, helping guide them to a gold medal in 2012 at the Olympic Games, as well as securing the same success at the 2010 world championships.

Johnson has spent significant time with Team USA, specifically on their development team. McGee has no prior Olympic experience; he will report to Las Vegas to train with the team immediately.

Team USA’s final exhibition game before the Olympics comes Sunday against Spain. They will face France in their Olympic opener.