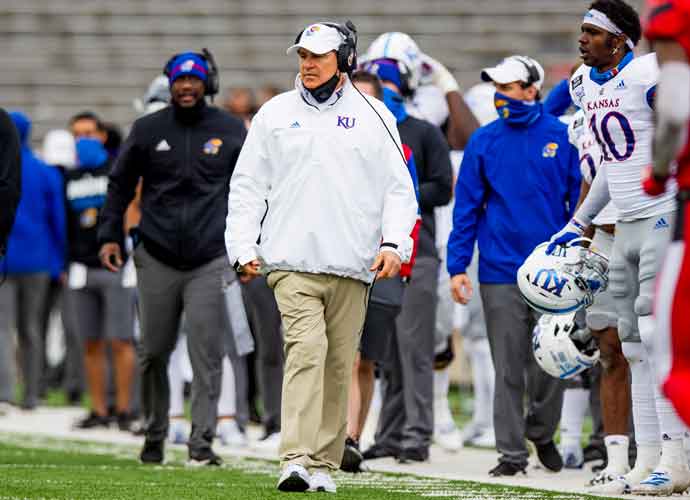 LUBBOCK, TEXAS - DECEMBER 05: Head coach Les Miles of the Kansas Jayhawks looks on during the second half of the college football game against the Texas Tech Red Raiders at Jones AT&T Stadium on December 05, 2020 in Lubbock, Texas. (Photo by John E. Moore III/Getty Images)

Former Kansas University football player Caperton Humphrey is considering bringing legal action against his former school, coach Les Miles and athletic director Jeff Long related to a dispute between him and teammates that led to his departure from the program in 2019.

Humphrey suspected that some of his teammates at Kansas had loosened the lug nuts on one of his tires. Humphrey and his family had relayed this information to the school alongside additional information that these players had been selling marijuana illegally.

This feud snowballed into an altercation at Humphrey’s apartment between him and these teammates. Supposedly, in order to smooth over tension, members of the KU athletic department (specifically Miles and Long) requested Humphrey complete his studies online from home. The arrangement – supposedly signed by the Humphrey family – included about $50,000 worth of benefits. In exchange for this money, Humphrey and his family would stay quiet about their gripes with the university.

Miles, Long and others at the Kansas University athletic department have not issued a public statement to reporters.