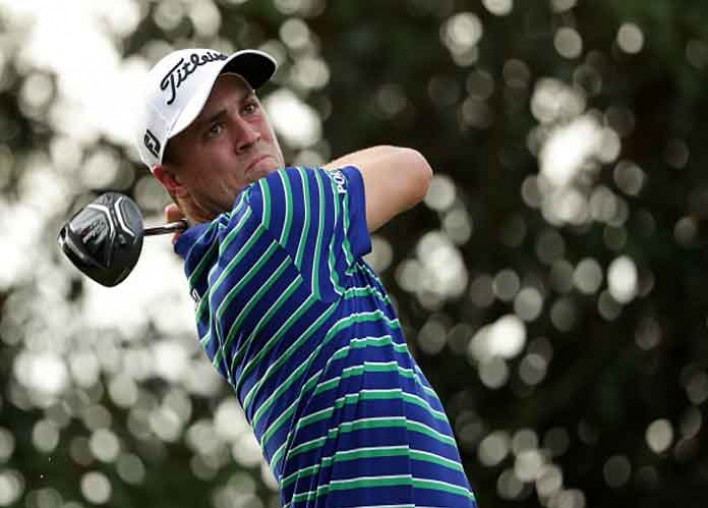 Justin Thomas gave the U.S. Team a much needed point in the President’s Cup when he birdied an 18-foot putt on the last hole in a foursome match Friday. After Day 1, the Americans found themselves trailing the International Team 4-1. An International side hasn’t lead by that much after one session in 16 years, according to CBS Sports.

Day 2 consisted of “foursome play,” where two players on a team alternate taking shots with one ball. Thomas was paired with Tiger Woods going into the fourth match up of the day as they faced Hideki Matsuyama and Byeong Hun An. The U.S. found themselves trailing the International Team 6-2 at that point with two matches left in the session.

The two teams were battling hard and remained tied after the 17th hole. Thomas started off the 18th with a drive that landed off to the right in the light rough. Woods stepped up next with a shot that dropped on the green before carrying 18 feet away from the hole. Matsuyama had a chance to sink a 25-foot birdie, but missed giving the Americans a chance to get a point.

Thomas sunk the putt and did his best Terrell Owens impression as he yelled at Woods , “I love me some me!” Woods and him celebrated with a strong embrace. “I’ve been fortunate to make a lot of putts. But to do it with my captain and teammate was awesome,” Thomas told CBS Sports.

“We were both screaming,” Woods said. “It was a phenomenal moment, and it was priceless. So I’m glad we were able to experience it together.”

Patrick Cantlay also birdied his final shot on the 18th hole to give the U.S. it’s first point of the day two matches prior to Thomas’ heroics. Rickie Fowler and Gary Woodland came back to win the last matchup of the day after trailing by two strokes with three holes to play.

The #IntlTeam preserved their lead, taking a 6.5-3.5 advantage during foursomes. Here’s what you might have missed last night from Day 2 of the #PresidentsCup