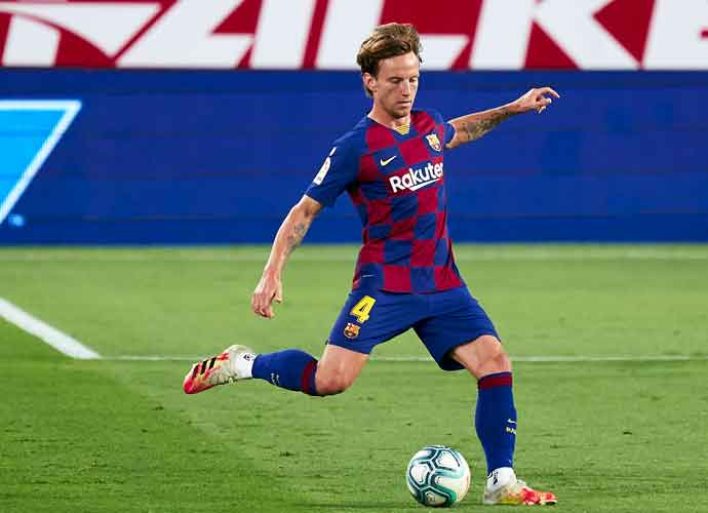 SEVILLE, SPAIN - JUNE 19: b of FC Barcelona with the ball during the Liga match between Sevilla FC and FC Barcelona at Estadio Ramon Sanchez Pizjuan on June 19, 2020 in Seville, Spain.

As the race for the La Liga title gets tighter between Real Madrid and Barcelona, every match matters. Whether it be a win, a draw or a loss, each will prove crucial in determining a winner. For the first 69 minutes of Barcelona’s match Tuesday against Athletic Bilbao, it looked like they would have just a one-point lead over Real Madrid in the standings. Enter Ivan Rakitic.

In the 71st minute Rakitic, who had been subbed into the match six minutes earlier, got a nice feed from Lionel Messi, to put his squad up 1-0. Rakitic’s goal was his first since March 2019. Post-game, Rakitic commented on his team’s victory and him getting his first goal of the season. “It was very tough for us to take control of the game, Athletic are a very tough side and did not make it easy for us, but I’m delighted to score my first goal of the season. Thirty-one league games is a very long time to wait, and I’m angry it has taken so long, but I’m happy I was able to help the team.

Despite the win, Barcelona’s big-three in Messi, Luis Suarez and Antoine Griezmann did not play up to par, and it showed. It seemed that there was still a little bit of rust for the three of them. With their club having just a three point lead in the standings over their rivals from Madrid, with seven matches remaining, the success of all three of those guys will be crucial if they want to win their third straight lead title.

Griezmann especially has not played well in recent weeks. Against Athletic Bilbao, Griezmann got one unenthused shot off in the 54th minute and was then subbed off nine minutes later.