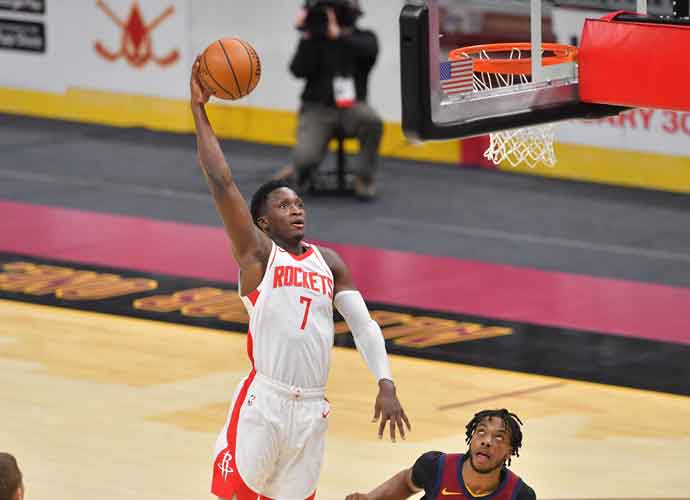 CLEVELAND, OHIO - FEBRUARY 24: Victor Oladipo #7 of the Houston Rockets shoots over Darius Garland #10 of the Cleveland Cavaliers during the fourth quarter at Rocket Mortgage Fieldhouse on February 24, 2021 in Cleveland, Ohio. The Cavaliers defeated the Rockets 112-96. NOTE TO USER: User expressly acknowledges and agrees that, by downloading and/or using this photograph, user is consenting to the terms and conditions of the Getty Images License Agreement. (Photo by Jason Miller/Getty Images)

The Miami Heat have made one of the biggest trades before the NBA trade deadline, acquiring star guard Victor Oladipo.

On Thursday, just minutes before the trade deadline, the Houston Rockets agreed to a deal that sent Oladipo to South Beach. The Rockets traded Oladipo to Miami in exchange for Avery Bradley, Kelly Olynyk and 2022 first-round pick swap rights. The trade deadline was on Thursday at 3 p.m., and the Oladipo trade talks continued up until the deadline hour.

The Rockets acquired Oladipo from the four-team trade that sent James Harden to the Brooklyn Nets. Because Oladipo is currently in his final contract season, the team had to offer a contract extension if they wanted him to return. Houston was interested in retaining the All-Star guard with the hopes of him becoming the team’s new franchise player, but it was not a mutual feeling. The guard declined the team’s offer of a two-year deal worth $45 million. As a result, Houston turned towards shopping the 28-year-old in order to at least get assets or players in return rather than losing him for nothing to free agency.

The trade brings Oladipo to a team that he wanted to join. The addition of the 28-year-old strengthens the Heats’ chances at making another deep playoff run. So far this season, the guard has averaged 20.8 points, 5.0 rebounds and 4.7 assists. Miami now adds a very talented guard to their deep backcourt rotation that includes Tyler Herro, Duncan Robinson and Goran Dragic.

Meanwhile, the Rockets get a solid stretch forward in Olynyk, who is averaging 10.0 and 6.1 rebounds this season. The forward will become a free agent after this season. Bradley has not played much this season due to COVID-19 and a calf injury. He is averaging just 8.5 points per game.

This trade indicates that Houston has gone into full-blown rebuild mode while the Heat are viewing this season as championship or bust. It will be interesting to see if the acquisition of Oladopo will push Miami past Philadelphia, Brooklyn and Milwaukee in the Eastern Conference.