The Houston Rockets have finally defeated the Dallas Mavericks in the opening round of the NBA Playoffs. On Sunday, the Mavs avoided the sweep by defeating the Rockets 121-109, but James Harden and company came back strong, outplaying Dallas yesterday to close out the series.

To be honest, this was supposed to happen, so the real interesting thing was what happened online following the win. The Rockets’ Twitter account released what some may call a controversial tweet. 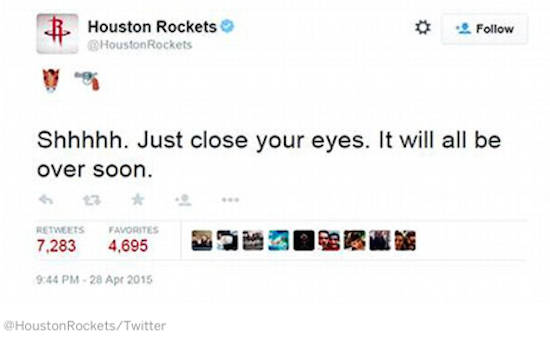 @HoustonRockets Not very classy but we still wish you guys the best of luck in the next round.

So, of course, the Rockets deleted the original tweet and released an apology.

Our Tweet earlier was in very poor taste & not indicative of the respect we have for the @dallasmavs & their fans. We sincerely apologize.

I understand that multi-billion dollar sports teams should not be tweeting things like that, but the initial tweet was absolutely hilarious. Whatever intern posted that — and was likely fired afterwards — needs to release more tweets like it.

When did sports become so cordial? People being nice is not why I watch these games. I love when two teams absolutely hate each other. It makes everything more interesting.

The Rockets next take on the winner of the Spurs and Clippers series.