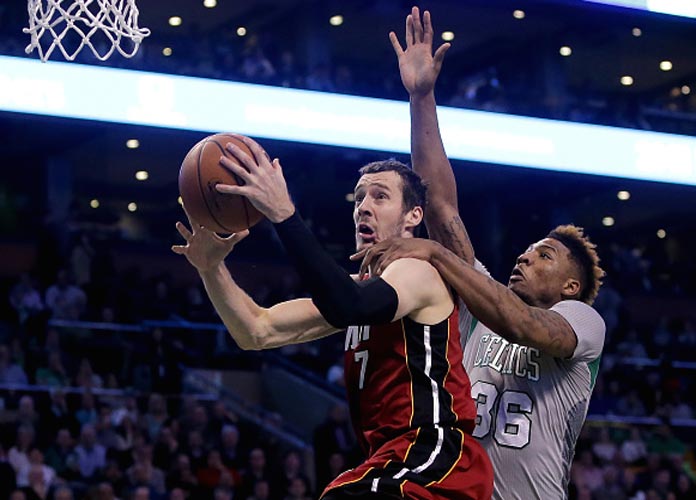 BOSTON, MA - APRIL 13: Goran Dragic #7 of the Miami Heat drives to the basket against Marcus Smart #36 of the Boston Celtics in the first half at TD Garden on April 13, 2016 in Boston, Massachusetts. (Image: Getty)

Goran Dragic once again proved to fans why he is one of the most important Miami Heat players, aside from Jimmy Butler.

Dragic has been an important playmaker on the team and has forced opposing defenses to bend when he’s the ball handler in the pick-and-roll, coming off handoffs or dictating the offense. On Friday night against the Utah Jazz, he showed why. Facing the Jazz, it was the second game for the guard after he missed nine games due to a sprained left ankle. In that game, he scored 26 points alongside Butler’s 33 points to put the Jazz away for a Heat victory.

Miami superstar Butler praised his guard and said of him, “Goran does basically the same thing I do, probably a little better,” he said. The praise did not stop there, and the superstar added, “He gets everybody easy shots, including myself, and then he’s directing traffic.”

The Slovenian guard told reporters after their win over the Jazz that he was focused on being consistent as a team. The guard stated, “We know what we’re capable of doing, we just need to be more consistent.”

That consistency showed off in Sunday’s game against the Atlanta Hawks. Butler did not play in the game, but Dragic facilitated the offense to a victory. The point guard only scored 13 points but kept the team active and involved on the offense. The team shared the ball, and Kendrick Nunn scored a team-high 24 points. Miami made a comeback to beat Atlanta 109-99.