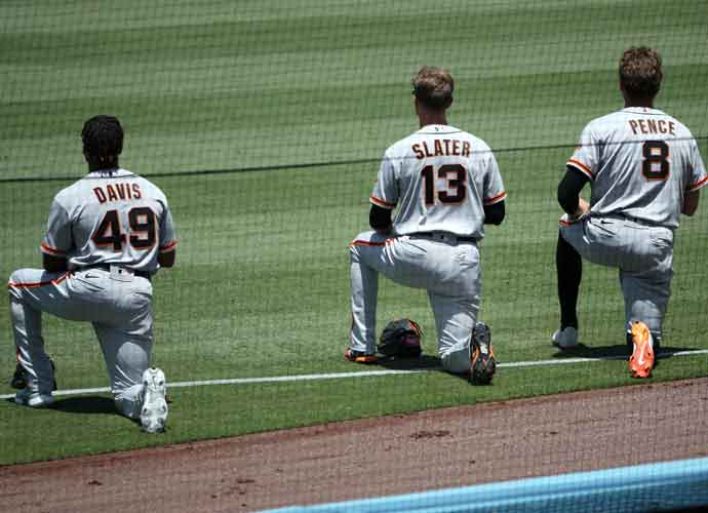 OS ANGELES, CALIFORNIA - JULY 25: Jaylin Davis #49, Austin Slater #13, and Hunter Pence #8 of the San Francisco Giants kneel during the national anthem before the game against the Los Angeles Dodgers at Dodger Stadium on July 25, 2020 in Los Angeles, California. The 2020 season had been postponed since March due to the COVID-19 pandemic.

The San Francisco Giants, who were the first team to show solidarity with the BLM movement in calling for racial justice for systematic racism and police brutality in America when the MLB season resumed last week and have again shown a form of protest by playing “Lift Every Voice and Sing” which the NAACP declared as the “Black National Anthem.”

The Giants public address announcer Renel Brooks-Moon led the ceremony saying, “In 1919, the NAACP proclaimed it as the Black National Anthem, for as you will hear, it is a rallying cry for freedom. The song is also a prayer, and a protest, and a reminder that the struggles of the past are still alive today, and that these struggles must be met with hope, with courage, with perseverance, with faith.”