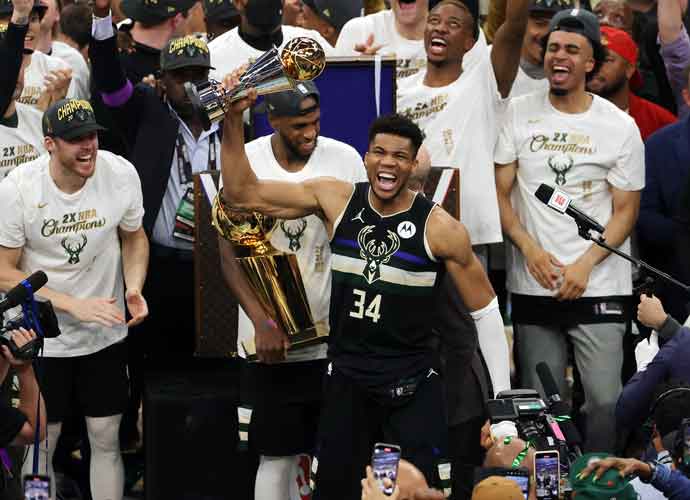 MILWAUKEE, WISCONSIN - JULY 20: Giannis Antetokounmpo #34 of the Milwaukee Bucks celebrates winning the Bill Russell NBA Finals MVP Award after defeating the Phoenix Suns in Game Six to win the 2021 NBA Finals at Fiserv Forum on July 20, 2021 in Milwaukee, Wisconsin. NOTE TO USER: User expressly acknowledges and agrees that, by downloading and or using this photograph, User is consenting to the terms and conditions of the Getty Images License Agreement. (Photo by Jonathan Daniel/Getty Images)

The Milwaukee Bucks captured its first NBA championship in 50 years. Led by two-time MVP Giannis Antetokounmpo, the Bucks defeated the Phoenix Suns by a final scoreline of 105-98 in a closely contested Game 6.

Antetokounmpo led the way with 50 points, 14 rebounds and five blocks to close out the series. He equaled Bob Pettit’s record for the most points in an NBA Finals closeout game.

The All-Star came into the postgame news conference wearing goggles, carrying a cigar and drinking out of a champagne bottle. He sat down at the desk with the Finals MVP trophy on one side of him and the Larry O’Brien Trophy on the other. The two-time MVP reflected on his feelings when he re-signed with the team. “I just couldn’t leave,” he said. “There was a job that had to be finished.”

Antetokounmpo got emotional when he began thanking the important people in his life following the miraculous come-from-behind series win.

“This is for my mom,” he said, fighting off tears. “She works extremely hard every day for me to be in this position, and she never pressured me to do other things. This is for my dad. He’s watching from above, and he can see it. This is for my significant other. Every day, she helps me be a better person. She lets me do what I’m supposed to do. She takes care of my son. And for my brothers.”

“I can be stubborn sometimes. I can disconnect myself from the world because I want this so bad,” the All-Star continued. “And I was able to get it, that’s why I was tearing up. But, like, people helped me be in this position. I didn’t do this by myself. Every freaking day people helped me. I want to thank everyone.”

Antetokounmpo scored 33 of his 50 points in the second half, leading Milwaukee back from a halftime deficit. The All-Star continuously tore through the Suns’ defense to get to the rim, and he made his free throws, going 17-for-19 for the game.