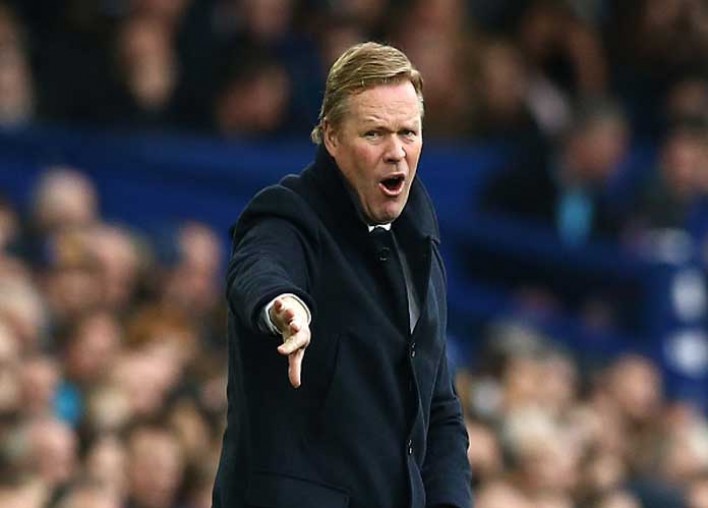 Ronald Koeman has already publicly stated that his dream is to manage Barcelona, but the Everton coach has confirmed that he will see out his three-year deal with the Premier League club to completion.

The 54-year-old Dutchman is in the first season of his contract at Goodison Park, having transferred from Southampton last summer.

Koeman said that he knows there is a lot of work left to do with Everton.

“Everyone knows that I am from Barca, they know my love for a club where I grew up as a player and as a person,” he told Spanish newspaper Sport. “In football, as in life, as in business, everything can be talked about and discussed.”

The manager also revealed that his other big “dream” in life is to coach his native country’s national team. Koeman served as assistant to Netherlands head coach Guus Hiddink for the 1998 World Cup.

“I now owe to Everton,” Koeman added. “We have a very powerful and exciting project and we will reinforce our best to try to reach next season the Champions League.”

The Dutchman was tied to a move to Barcelona after manager Luis Enrique announced he was stepping down at the end of the season.

“I don’t see me being the next manager,” he added.”I mentioned several times it’s human ambition – for players, for managers. That doesn’t change my position or contract with Everton. I’m really happy, I’m looking forward to next season.”

Koeman also announced that forward Arouna Kone will leave Everton at the end of the season. The 33-year-old Ivory Coast star signed with the Toffees from Wigan Athletic in 2013.

The Dutch manager also stated Everton will allow winger Aaron Lennon all the time he needs to recover from his stress-related illness.

The 30-year-old English midfielder was detained under the Mental Health Act on Sunday following concerns about his well-being. Lennon has just over 12 months remaining on the three-year deal he inked after transferring from Tottenham in 2015.

“As you know the club mentioned that Aaron had a stress-related illness and it is a private situation,” Koeman said. “We try to give him all the support (to enable) him to come back as soon as possible.

“We have contact with him and his family and I think it is best we keep it between club, the player and his family,” Koeman continued. “We would like to see him back but what is important now is for him to be like he was. Life, health, is more important than football.”

Koeman added that he understands the greater pressures soccer players face now compared to 20 years ago due to factors like social media and playing more games each season.