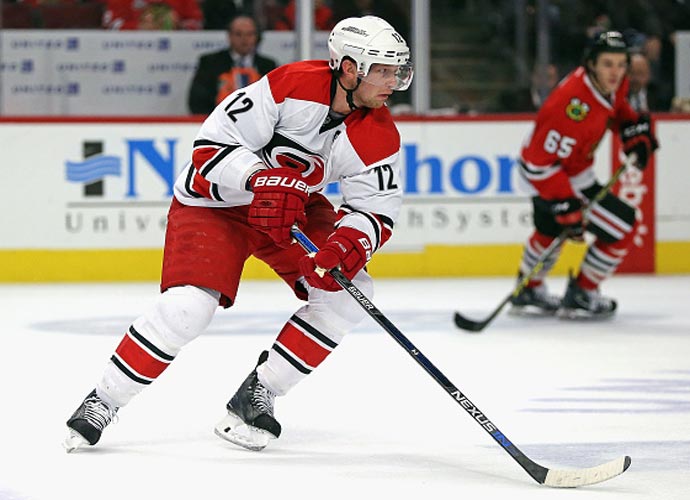 Caption:CHICAGO, IL - DECEMBER 27: Eric Staal #12 of the Carolina Hurricanes controls the puck against the Chicago Blackhawks at the United Center on December 27, 2015 in Chicago, Illinois. The Hurricanes defeated the Blackhawks 2-1. (Photo by Jonathan Daniel/Getty Images)

On Thursday, just a few hours before his return to Raleigh, North Carolina, former Carolina Hurricanes captain Eric Staal wrote a letter in The Players’ Tribune thanking his former teammates and Hurricanes fans.

Staal, 31, was traded from the Hurricanes to the New York Rangers at the trade deadline on Feb. 29. He said that the most difficult part of leaving the Hurricanes, other than saying goodbye to his teammates and younger brother Jordan Staal, was watching his former teammates preparing for a game that night.

“For more than a decade, there weren’t that many Canes games that I hadn’t been a part of,” the Canadian captain and centerman wrote. “It was odd to be watching everybody – the players, the trainers, event the front office – getting into their routine while I was packing up.

“It really hit me hard at that moment just how much I was going to miss everything. Bu I also saw that life goes on.”

Staal spent his first 13 years in the NHL with the Hurricanes. He became the team’s second all-time leading scorer, racking up 322 goals and 775 points in 909 career games.

He won his first in 2006 with the Hurricanes and also won the Olympic gold medal for Canada at the 2010 Winter Games in Vancouver.

Staal singled out several former teammates, including current Hurricanes general manager Ron Francis and goaltender Cam Ward, the only Carolina player remaining in Raleigh from that Stanley Cup winning season. He also mentioned his other younger brother, defenseman Marc Staal, who is now his teammate on the Rangers.

“We’re just the kids of a couple of sod farmers who love hockey,” Staal wrote in the letter. “Playing in this league is an incredible special honour. But being able to do it with the people closest to you is something else entirely. I’ll always be thankful for that opportunity.”

Caption:CHICAGO, IL – DECEMBER 27: Eric Staal #12 of the Carolina Hurricanes controls the puck against the Chicago Blackhawks at the United Center on December 27, 2015 in Chicago, Illinois. The Hurricanes defeated the Blackhawks 2-1. (Photo by Jonathan Daniel/Getty Images)