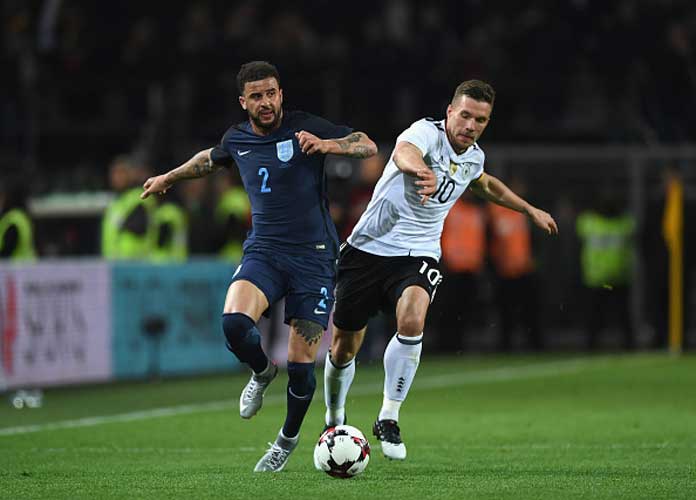 DORTMUND, GERMANY - MARCH 22: Kyle Walker of England (L) and Lukas Podolski of Germany (R) battle for possession during the international friendly match between Germany and England at Signal Iduna Park on March 22, 2017 in Dortmund, Germany. (Photo by Shaun Botterill/Getty Images)

England fans came under fire on social media on Wednesday evening after their chants before the national team’s 1-0 friendly-game loss to Germany in Dortmund were heard loud and clear on television.

The first thing England supporters were criticized for was for booing the German national anthem before the game started, after the home fans respectfully sat through England’s anthem.

But it was the fact that English fans began singing the controversial tune ’10 German Bombers’ while Germany’s anthem played before the game that drew the most ire from local supporters.

Radio presenter and former Liverpool striker Stan Collymore called the song “embarrassing,” and many other commentators and journalists seemed irked by the unsportsmanlike display from England fans.

The tune makes references to World War II, and its chanting was widely—though not completely— condemned by fans viewing at home. Many people seemed to think it was particularly tactless to sing the ‘bombers’ song on the same day there was a terrorist attack outside the British Parliament in London.

Sure it’s just a coincidence that the England fans were doing the actions to the 10 German bombers song during the German national anthem. pic.twitter.com/uiYHBzwDD1

“England supporters are out singing their German counterparts”, says Tyldelesly as they relentlessly sing ’10 German bombers”.

Actually, “10 German Bombers” is highly inaccurate, since the Luftwaffe lost 123 Dorniers, Junkers and Heinkel aircraft in the Battle of Bri

Germany won the game 1-0 thanks to a goal from Polish-born former Arsenal forward Lukas Podolski, who found the back of the net with a left-footed shot from outside the penalty box in the 69th minute. Podolski, 31, was playing in his 130th and final game with the German national team.

The striker— who plays for Istanbul-based club Galatasaray—gave a speech before the game, thus kick-off was delayed by a few minutes. Podolski, who helped Germany win the World Cup in 2014, walked off the field at Signal Iduna Park to a standing ovation in the second half. He retires from international soccer with a record 49 goals.

Jamie Vardy had a first-half penalty appeal rejected, and his England teammates Adam Lallana and Dele Alli also had good scoring chances in the first half. Lallana hit the post, while Alli took a shot that was blocked by Barcelona goalkeeper Marc-Andre ter Stegen.

The loss marked England’s first defeat under new manager Gareth Southgate. Southgate had been undefeated in four games as interim manager following Sam Allardyce’s abrupt departure as England boss after just one game due to a newspaper scandal.