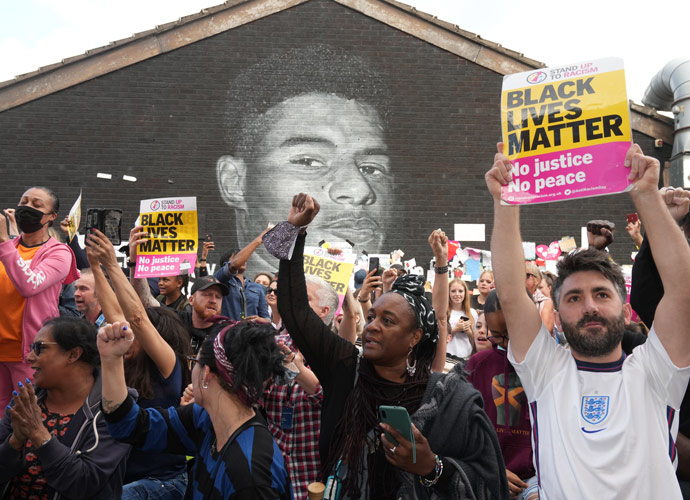 MANCHESTER, ENGLAND - JULY 13: People hold Black Lives Matter posters aloft as they gather at the newly repaired mural of England footballer Marcus Rashford by the artist known as AKSE_P19, which is displayed on the wall of a cafe on Copson Street, Withington, after AKSE_P19 came to repair today it after it was defaced by vandals in the aftermath of England's Euros loss on July 13, 2021 in Manchester, England. Rashford and other Black players on England's national football team have been the target of racist abuse, largely on social media, after the team's loss to Italy in the UEFA European Football Championship last night. England manager Gareth Southgate, Prime Minister Boris Johnson, and the Football Association have issued statements condemning the abuse. (Photo by Christopher Furlong/Getty Images)

Police in England launched an investigation into the racist abuse directed towards three black players on the England national team that missed penalty kicks in England’s loss to Italy in the European Championship Final.

Both the Metropolitan Police and English Football Association expressed condemnation of the incidents and social media posts. “We will do all we can to support the players affected while urging the toughest punishments possible for anyone responsible,” the English Football Association added. “We will continue to do everything we can to stamp discrimination out of the game, but we implore government to act quickly and bring in the appropriate legislation so this abuse has real-life consequences.”

Bukayo Saka, Marcus Rashford and Jadon Sancho are young players on the England squad who have been outspoken about inequality. Rashford has notably led campaigns targeting child poverty and swayed the British government to implement certain policies for the cause.

British Prime Minister Boris Johnson said, “those responsible for this appalling abuse should be ashamed of themselves.” That said, Johnson has faced criticism himself for enabling the booing and harsh response towards the England team for kneeling before matches as a form of protest.

Former Manchester United player and current SKY News commentator Gary Neville said: “The prime minister said it was OK for the population of this country to boo those players who are trying to promote equality and defend against racism. It starts at the very top and so for me I wasn’t surprised in the slightest that I woke up this morning to those headlines.”

England manager Gareth Southgate saw the situation as unforgivable. “We have been a beacon of light in bringing people together, in people being able to relate to the national team, and the national team stands for everybody and so that togetherness has to continue.”

Prince William, president of the English Football Association, joined the outcry of condemnation. “It is totally unacceptable that players have to endure this abhorrent behaviour. It must stop now and all those involved should be held accountable,” William wrote on Twitter.

London Mayor Sadiq Khan also got involved on Twitter, calling for social media outlets to hold people accountable. “There is absolutely no place for racism in football or anywhere else. Those responsible for the disgusting online abuse we have seen must be held accountable – and social media companies need to act immediately to remove and prevent this hate.”

Racist abuse was seen earlier in the tournament too, as investigations were launched after racist tweets were sent following France‘s loss to Switzerland in penalty kicks in the Euro 2020 Round of 16.