Eagles' Malcolm Jenkins Tells Refs To "Stay Off The Bottle" After Controversial Call Vs. Cowboys - uSports.org 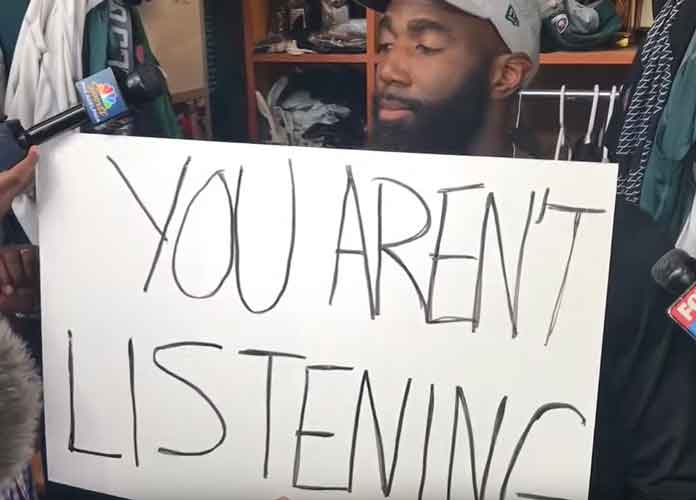 Eagles’ Malcolm Jenkins Tells Refs To “Stay Off The Bottle” After Controversial Call Vs. Cowboys

The Philadelphia Eagles suffered a brutal loss at the hands of the division rival Dallas Cowboys, possibly due in part to a controversial call on the opening kickoff.

The call proved to be crucial down the line, as the Cowboys scored first, and the Eagles lost in overtime to an Amari Cooper touchdown, 29-23. It prompted frustration from Eagles safety Malcolm Jenkins, who ripped NFL replay officials, insisting that they “stay off the bottle.”

Malcolm Jenkins saying what every #Eavles fan is thinking right now about the opening call of the game: pic.twitter.com/YPVQp3JJsx

The call came after Jenkins hit the Cowboys return man, Jourdan Lewis, and forced a fumble that Eagles linebacker Kamu Grugier-Hill appeared to recover. Lewis was initially ruled down prior to the fumble, thus prompting the Eagles to challenge the play. The replay officials determined that Lewis was not down, meaning a fumble did occur, though ruling that Dallas recovered. Claiming that there was not enough evidence to overturn the ruling, Dallas maintained possession due to “unclear” evidence to support recovery.

There are only Eagles in this pile along with the fumbled football, and yet they rule no clear recovery after 54 stands up w the ball. pic.twitter.com/lmTH5l60PL

Several fans were livid after it appeared that the Eagles did in fact recover, and Jenkins was just as assured. “That was a pretty terrible call,” Jenkins said. “They reviewed it and the explanation I got was that it wasn’t a clear recovery, although Kamu had the ball in his hand and there was only Eagles defenders on the ball in replay. So whoever’s watching that in New York should stay off the bottle.”

A game-changer early on, the play would have resulted in an advantageous start to the game with the Eagles near Dallas’ redzone, but instead saw Dallas score the first points in the game where every point mattered. “Common sense, you saw Kamu come out with the ball. Obviously they don’t pay me to make calls like that,” Jenkins said, “but that was, in hindsight, obviously a big play in the game.”

The play was big, and the consequences even bigger. The loss kicked the Eagles almost all the way out of playoff contention, as they now sit at 6-7, two games behind the Cowboys at 8-5. The Eagles have a 5.8 percent chance to make the playoffs after Sunday’s overtime loss.