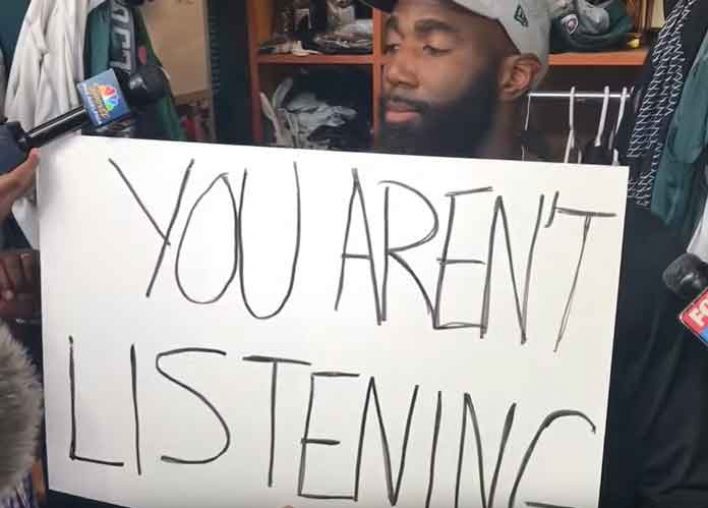 Philadelphia Eagles safety Malcolm Jenkins is not afraid to let President Donald Trump‘s administration know how little they know about the NFL and its players, and how tone-deaf they are to issues concerning racial injustice.

Jenkins, who is black, responded to the White House disinviting his team this week (to celebrate their Super Bowl championship) by making a series of signs.

Here are what the hand-written signs read:

-“More than 60 % of people in prison are people of color”

Jenkins, 30, did not say a single word to reporters, opting instead to simply let the signs speak for themselves.

Jenkins is one of several Eagles players who protested the national anthem last season by raising his fist, and who turned down the invitation to the White House.

Several of the team’s players are now saying they don’t wish to say much more about the controversy.

“I have, like, three years of quotes about me and Donald Trump,” said defensive end Long. “I’m not going to keep going down that road, respectfully. I’m on to minicamp.”

Long added, however, that he hopes future Super Bowl-winning NFL teams and presidents won’t have to fight anymore about White House visits.

“Hopefully we won’t have to make decisions like that in a couple of years,” Long stated. “The players didn’t create this division.”