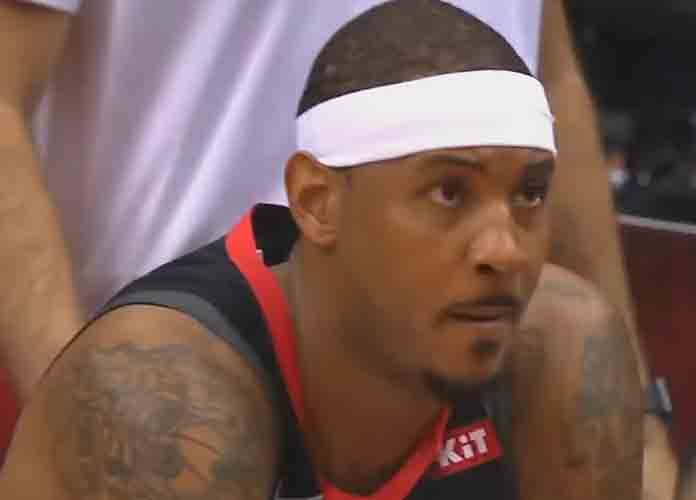 It’s been an up-and-down week for Carmelo Anthony. First, he was traded to the Chicago Bulls and will be waived if they can’t trade him. Spoiler: They won’t. It hurts to know the third-worst team in the conference doesn’t want you. Then, he returned to Madison Square Garden as a fan on Sunday and stood up and waved after receiving a standing ovation.

After the game, Melo said “I’ve had some great years in this building. I look forward to coming back and playing in this building some more.” Maybe when he got the standing O he basked in it and thought back to his years as a Knick. Maybe he hoped for more. But he didn’t realize that everyone else had moved on, treating him as if he was already retired.

“At this point, I just want to be happy,” Anthony said about his plans. “I think I’ve put myself in a good, peaceful mind state right now, able to focus in on what I need to focus in on. And whatever’s going to make me happy, then we’re going to make it happen.”

Anthony attended the game to see Dwyane Wade— a close friend, a three-time champion and fellow 2003 draft class alumni — play out his last game in MSG. Anthony received a long standing ovation when he was shown on the jumbotron during the first quarter. LeBron James and DWade showed their support for Melo on Twitter.

Melo, now 34, averaged 13.4 points on 40 percent shooting in 29 minutes per game this season for the Rockets.  He’s an aging iso style ball handler in a league that’s outgrown it. Some stars grow old and try to win championships like Ray Allen. Others grow old and try to win locker room feuds like Allen Iverson and now Melo.  Though he only won a single playoff series in New York, he’s their brightest spot in the past 20 years. Prime Melo is gone. The Knicks are still holding on to him.

Hawks Close Out Knicks, Will Face 76ers In Second Round