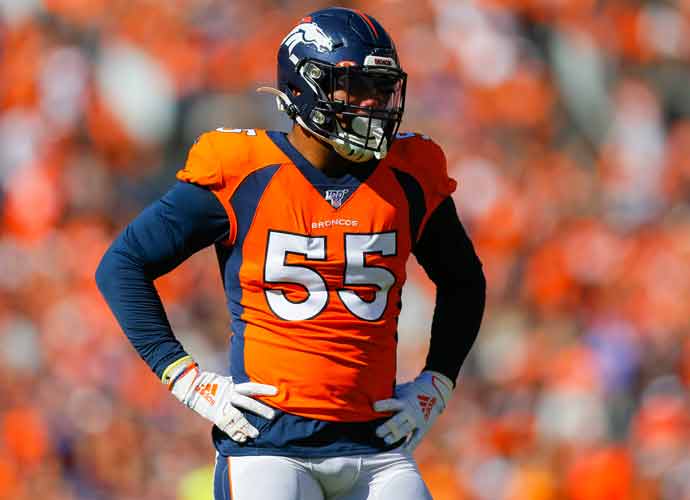 DENVER, CO - SEPTEMBER 29: Outside Linebacker Bradley Chubb #55 of the Denver Broncos defends on the play against the Jacksonville Jaguars during the first quarter at Empower Field at Mile High on September 29, 2019 in Denver, Colorado. The Jaguars defeated the Broncos 26-24. (Photo by Justin Edmonds/Getty Images)

Bradley Chubb, the powerhouse outside linebacker for the Denver Broncos, was arrested earlier in the week. Chubb was detained after failing to appear in court for minor traffic infractions — expired plates and driving under restraint. This incident precedes the highly anticipated opening day for the Broncos, who are set to clash with the New York Giants at MetLife Stadium on Sunday.

On Tuesday, Chubb was pulled over for speeding when the traffic officer became aware of his failure-to-appear-in-court warrant. Chubb ended up spending his afternoon in the Douglas County Detention Center before positing a small bond. Douglas County Sheriff’s Spokesman Sgt. Jeff Miller shed some light on the situation: “After contacting Mr. Chubb, it was discovered that he had a warrant out of Arapahoe County for FTA (Failure to Appear) on traffic offenses and was taken into custody and transported to the Douglas County Detention Center.”

Chubb took to Twitter claiming that he thought his traffic infraction had been resolved, as well as taking full responsibility for his actions and vowing to help the Broncos get a win on Sunday.

Chubb is heading into his fourth year in the NFL and has built quite the hard-charging reputation already. He was the first pick for the Broncos and fifth overall in the 2018 NFL draft. Since entering the league, he has played 34 games, recording 81 tackles, completing 20 sacks and setting Denver’s rookie sack record after taking down 12 QBs in 2018.

Although trudging through a turbulent week while also coming off an injury, Chubb is optimistic that he will have a positive impact against the Giants. The game will take place on Sunday, at 4:25 p.m. EST.