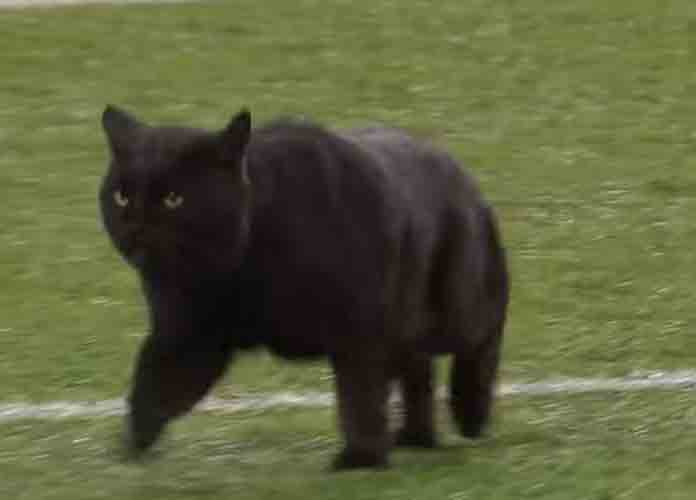 While most times a game is stopped due to people running onto the field and eventually being escorted off by security, the delay in the game Monday night was caused by a much smaller offender: a small black cat that somehow found its way down to MetLife field.

Kevin Harlan, calling the game for Westwood One Sports, has a history of calling fans running onto the field, so naturally, a similar call with a slightly smaller field intruder would come just as naturally.

“He’s walking to the three…he’s at the two…and the cat is in the CDW Red Zone, CDW, the people who get…now a policeman, a state trooper has come on the field, and the cat runs into the end zone! That is a touchdown!”

Kevin Harlan’s Westwood One radio call of the cat on the field is, as you might expect, an all-time great call. How much of a pro is Harlan? He worked a sponsor read into it. pic.twitter.com/3x0MVNEHNY

ESPN’s commentators also weighed in on the spectacle:

“Look at his change in direction,” Booger McFarland said as the critter darted around the end zone.

Although fans are often annoyed at the interruption of a game, especially when it is at the hands of another spectator, most were in agreement that the cat incident provided some comical relief during a game that was otherwise a large blowout.

The only one who wasn’t particularly a fan of the cat was Cowboys owner Jerry Jones who said, “he was so mean, I didn’t even want to look at him,” and “I know he was looking at me the whole time he was out there.”

Saquon Barkley, the Giants’ running back, offered a similar sentiment, “What I didn’t like is, we were going good and it stopped us,” he said. “How did a black cat get on the field?”

On the other hand, the Dallas Cowboys absolutely dismantled their division-rival New York Giants, handing them a 37-18 beat-down and knocking them to 2-7 on the year.