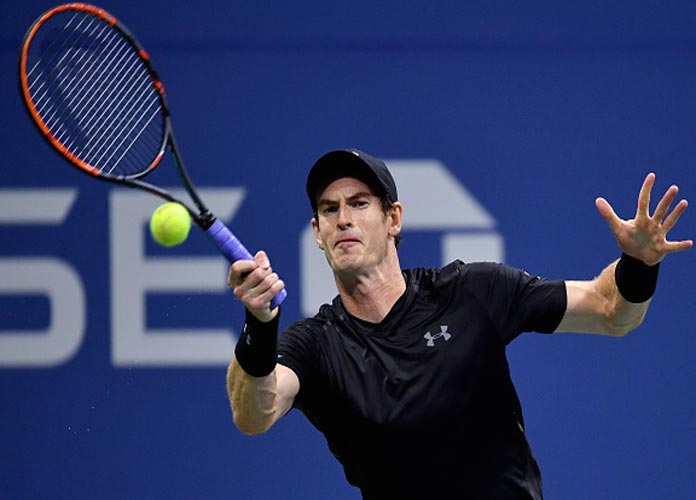 NEW YORK, NY - SEPTEMBER 05: Andy Murray of Great Britain returns a shot to Grigor Dimitrov of Bulgaria during his fourth round Men's Singles match on Day Eight of the 2016 US Open at the USTA Billie Jean King National Tennis Center on September 5, 2016 in the Flushing neighborhood of the Queens borough of New York City.

Andy Murray reached the third round of the Barcelona Open on Wednesday after Australian Bernard Tomic retired with an injury.

Tomic, who eliminated German Dustin Brown (who is also Jamaican) in three sets in Tuesday’s first round, withdrew from the tournament, saying he could not face top-seeded Brit Murray due to a lower back injury.

Murray was initially going to skip the Barcelona Open but chose to play after he was eliminated in the third round at the Monte Carlo Masters, where he lost a 4-0 lead in the deciding set to Albert Ramos-Vinolas.

The Brit will next face 16th-seeded Spaniard Feliciano Lopez in Thursday morning’s Round of 16. Lopez defeated his countryman Albert Montañés 6-2, 6-2 on Wednesday.

Murray recently suffered a right elbow injury that sidelined him from the Miami Open and the Davis Cup quarterfinals.

Meanwhile, sixth-seeded Brit Johanna Konta, the World No. 7, reached the second round of the Porsche Grand Prix in Stuttgart, Germany early Wednesday with a 7-6 (7-5) 3-6 6-1 victory over Japan’s Naomi Osaka.

Konta, 25, ended up crying at a Fed Cup tie in Romania last week after the nation’s former captain, 70-year-old legend Ilie Nastase, verbally harassed her during her game against a Romanian opponent.

The young Brit expressed sympathy for 19-year-old Osaka, who is suffering from an injury that helped Konta win her match.

“I think obviously you could tell she [Osaka] was struggling, I hope everything is OK with her and she recovers quickly,” Konta said. “It was just important for me to stay on my own game. Even though I lost the second set I didn’t feel like I did much wrong.”

Konta had not lost a set in two previous matches with Osaka, although clay is her weakest surface. The pivotal moment for the Brit came when she saved two break points in the third game of the third set before then breaking the Japanese teenager’s serve in the next.

The Brit next faces Latvian Anastasija Sevastova in the Round of 16 Thursday morning.

NEW YORK, NY – SEPTEMBER 05: Andy Murray of Great Britain returns a shot to Grigor Dimitrov of Bulgaria during his fourth round Men’s Singles match on Day Eight of the 2016 US Open at the USTA Billie Jean King National Tennis Center on September 5, 2016 in the Flushing neighborhood of the Queens borough of New York City. (Photo by Mike Hewitt/Getty Images)