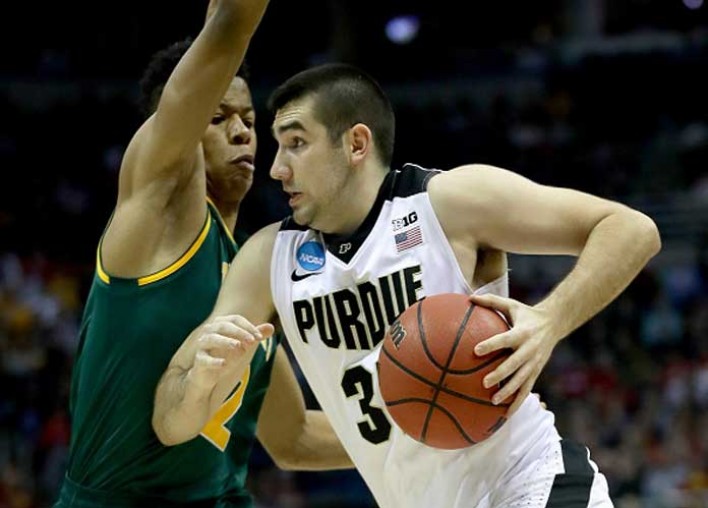 MILWAUKEE, WI - MARCH 16: Dakota Mathias #31 of the Purdue Boilermakers dribbles the ball while being guarded by Trae Bell-Haynes #2 of the Vermont Catamounts in the second half during the first round of the 2017 NCAA Men's Basketball Tournament at BMO Harris Bradley Center on March 16, 2017 in Milwaukee, Wisconsin.

The No. 2 UMBC Retrievers will visit the No. 1 Vermont Catamounts in Saturday’s America East Conference Final, and here is everything you need to know before the matchup.

UMBC (University of Maryland, Baltimore County) reached the Final after defeating Hartford 75-60 in Tuesday night’s semifinal in Baltimore. The Retrievers (23-10) are one victory away from their first NCAA Tournament appearance in a decade, and have been led by talented fifth-year guard Jairus Lyles (13 points). UMBC held Hartford (19-13) to 40.4 percent shooting and forced 14 turnovers.

“Once we get our defense going, we know we can get our offense going,” said UMBC senior guard Jourdan Grant, who had 11 points and two steals off the bench. “We take pride in our defense. Last year, we weren’t such a good defensive team. This year, we really stepped it up and changed it.”

The Retrieves will now face a challenging opponent in defending champion Vermont (27-6), against whom they have played 36 times all time and lost 32. The Catamounts lost just one time in conference play this season.

Saturday’s game at Roy L. Patrick Gymnasium in Burlington, Vermont will begin at 11 am EST and will air on ESPN2.

MILWAUKEE, WI – MARCH 16: Dakota Mathias #31 of the Purdue Boilermakers dribbles the ball while being guarded by Trae Bell-Haynes #2 of the Vermont Catamounts in the second half during the first round of the 2017 NCAA Men’s Basketball Tournament at BMO Harris Bradley Center on March 16, 2017 in Milwaukee, Wisconsin. (Photo by Jonathan Daniel/Getty Images)