Alvin Kamara And Other NFL Stars To Put Speed To The Test - uSports.org 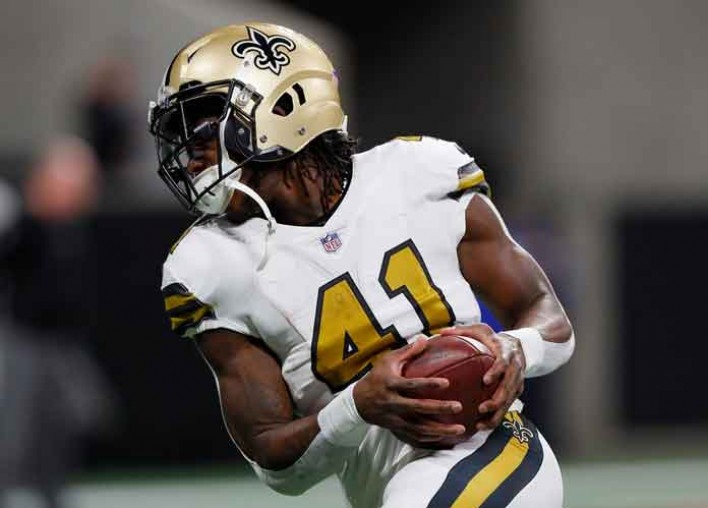 ATLANTA, GA - DECEMBER 07: Alvin Kamara #41 of the New Orleans Saints warms up prior to facing the Atlanta Falcons at Mercedes-Benz Stadium on December 7, 2017 in Atlanta, Georgia. (Photo by Kevin C. Cox/Getty Images)

Speed indeed kills, for everyone except Alvin Kamara of course, or at least he’ll try to prove that this Saturday in South Florida as the star New Orleans Saints running back gears up to race at the 40 Yards of Gold Challenge.

Kamara, alongside some other fellow NFL players plan to test their speeds against each other, all looking to advance to a final race and eventually win the $1 million dollar prize. As its title somewhat explains, the challenge allows participants to race each other in 40 yard dash events, similar to the event at the NFL combine every year. Although the event often includes track stars specializing in speed, NFL talents such as Kamara plan to try their luck against other speedsters once the starter pistol blares.

Although the NFL’s participants this year likely see no problem with taking home an extra million dollars, most players such Kamara’s teammate Ted Ginn Jr. feel more compelled by the opportunity to gain bragging rights over other NFL players, rather than the cash. For Ginn, speed stands as his trademark ability as an NFL receiver, serving as kick return man for many years aside from his wide receiver duties. Ginn commented on his reputation as a top speed talent in the NFL as he stated, “When you think about speed and you come to the New Orleans Saints, you think about one guy. We all got our labels of who we are. So we all just try to go out and man up to ’em.”

As the official data sponsor of the 40 Yards of Gold contest – we preview the OFFENSE MATCHUP in Round 1 between Alvin Kamara & Robby Anderson.

Use promo code 40PFF to receive 10% off tickets! https://t.co/d5H1PESbA0 pic.twitter.com/VJ92oYmXZH

After its creation years ago by Charles Stewart and Dr. Alijah Bradley, the 40 Yards of Gold Challenge poisesa to reach new heights with the plethora of NFL talent set to square off. NFL legend Chad Johnson adds into the mix as well, as the wide receiver who outran many himself during his playing days gears up to host the event with DJ Irie alongside musical talent Rick Ross.

For those outside the Florida area, the event remains available through pay–per–view at the event’s website. The show begins at 7 p.m. ETS this Saturday, June 28.

Drew Brees Issues Second Apology For His Remarks On The Flag