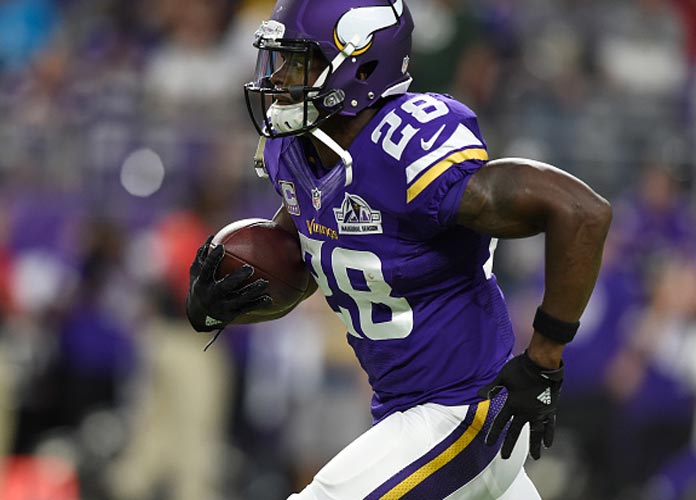 MINNEAPOLIS, MN - SEPTEMBER 18: Adrian Peterson #28 of the Minnesota Vikings warms up prior to a game against the Green Bay Packers on September 18, 2016 at US Bank Stadium in Minneapolis, Minnesota. (Photo by Hannah Foslien/Getty Images)

The Washington Redskins are seeking to strengthen their rushing game this season, and thus met with several top running backs in free agency this week including veteran Adrian Peterson.

Peterson, 33, visited the team on Monday. The seven-time Pro Bowler — a three-time NFL rushing yards leader who was also the Offensive Player of the Year in 2012 and a league MVP — was released by the Arizona Cardinals in March. Peterson spent his first 10 NFL seasons with the Minnesota Vikings, who drafted him as the seventh overall pick out of Oklahoma in 2007. Peterson suffered a neck injury late last season.

“I fly in tonight. I’m down for working out or whatever I have to do to make the team,” Peterson told ESPN.

On Sunday, Washington hosted running back Jamaal Charles, who played with the Denver Broncos last year after spending his first nine seasons with the Kansas City Chiefs. The Redskins also met with former New York Giant Orleans Darkwa, who worked out with Washington.

Redskins coach Jay Gruden told ESPN that his squad isn’t seeking a starting running back, as Rob Kelley is set to keep that position.

“We want to get physicals on them just in case,” Gruden said of Peterson, Charles and Darkwa. “We’ve had very unlucky situations with our running backs. If something else happens, we’ll be really, really, really thin. We want to make sure we’re covering all our bases right now, and we’ll address it when we feel like we have to.”

Gruden is right about Washington’s running backs situation. The team lost rookie Derrius Guice — a second-round pick out of LSU — to a season-ending knee injury in its first preseason game, and a pair of backups — Byron Marshall and Samaje Perine — recently injured their ankles.

Darkwa, 26, has played the last four seasons with the Giants. He led New York with 751 rushing yards in 2017, 154 of which came in the team’s regular-season finale, a victory over the Redskins. Darkwa — who is now completely healthy after undergoing leg surgery in May — has scored nine rushing touchdowns in his four-year pro career. Thus, it seems like he would be the weakest asset for Washington, while Peterson — one of the top NFL pass rushers of his generation —  would likely be the strongest.

Max Kellerman of ESPN’s First Take said Monday he was convinced Peterson would not be able to deliver a productive seasons for the Redskins should the team choose him. Kellerman cited the running back’s old age as one of his main reasons.

“Is [Peterson] going to give you production or replacement value? I don’t even know if he is replacement value at this point. Why not go with a young running back you may have around for four or five years?” said Kellerman. “Develop something. Why give those carries to a guy who can’t get average yards per carry?” he added of Peterson.

Adrian Peterson Expresses Desire to Play with Brady and the Buccaneers