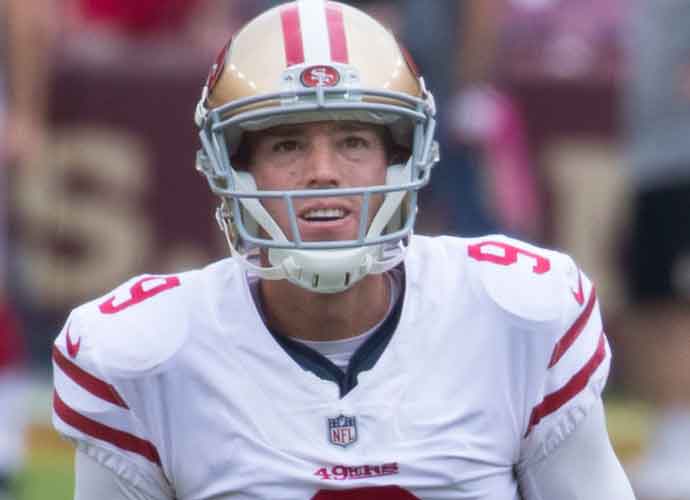 Kicker Robbie Gould re-signed with the San Francisco 49ers, beating the 4 p.m. EST deadline for long-term contract extensions on Monday. According to ESPN, Gould signed a deal with the Bay Area team that reaches two-year, $10.5 million guaranteed deal, with a two-year player option.

Gould’s deal includes a signing bonus summing up to $3 million, and will be earning a base salary of $3.15 this upcoming season, and $4.35 million for the 2020 season, according to Adam Schefter of ESPN. If he picks up his two-year player option for the 2021 season and the 2022 season, he will be looking at a $4.5 million salary, then a $4 million salary.

The 36-year-old requested for a trade back in April, but the team said they would deny the request. He seemed to want to return to his home in Chicago, but has obviously changed his mind since. Perhaps he is staying because he is now the second-highest paid kicker in the NFL, behind Baltimore Ravens‘ Justin Tucker.

This just in: 49ers and K Robbie Gould reached agreement this morning on a long-term deal, beating today’s deadline for franchise players to sign a deal, sources tell ESPN.

Gould was cut by the Chicago Bears back in 2016 after struggling to consistently perform for two seasons. He then signed with the 49ers and has been one of the more reliable specialists in the NFL. He’s missed just three field goals in his last 85 kicks in the three seasons he’s been in San Francisco.

Bears fans will be especially disappointed with Gould resigning with the 49ers, as they are in dire need of a kicker, failing to find a suitable replacement after the Cody Parkey miss in the NFC playoffs against the Philadelphia Eagles. The Bears could still get him however, as he is now under contract, meaning they could trade for him if the 49ers would be willing.

John Lynch, the general manager of the 49ers, and head coach Kyle Shanahan have been consistent and successful this summer after multiple long-term deals, and solid draft picks from this summer may prove to be the right decision.