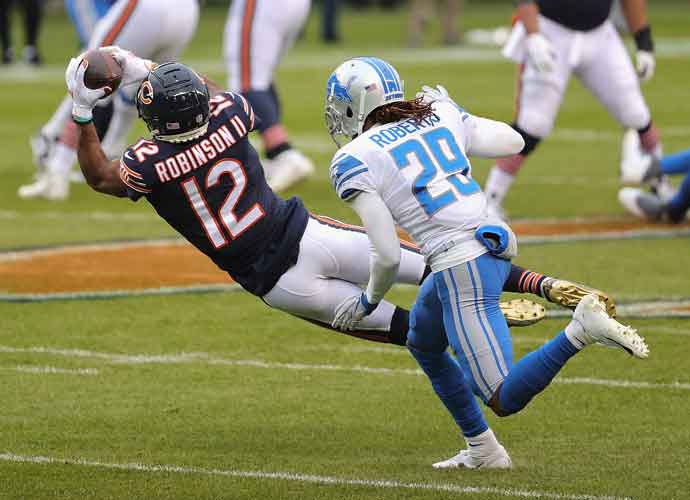 CHICAGO, ILLINOIS - DECEMBER 06: Allen Robinson #12 of the Chicago Bears catches a pass in front of Darryl Roberts #29 of the Detroit Lions at Soldier Field on December 06, 2020 in Chicago, Illinois. The Lions defeated the Bears 34-30. (Photo by Jonathan Daniel/Getty Images)

Chicago is hoping to make another playoff appearance this upcoming season. In the offseason, the Bears signed veteran quarterback Andy Dalton to a one-year deal. Chicago also traded up to select quarterback Justin Fields in the 2021 NFL Draft. Dalton is currently expected to be the opening day starter, but Fields has a very good chance of taking over as the starting quarterback at some point in the season. The rookie may even be the Week 1 starter if he outperforms Dalton in the preseason quarterback competition.

In one of the most critical moves of the offseason, the Bears franchise-tagged star wide receiver Allen Robinson. Robinson showed up for minicamp earlier this week, which is noteworthy considering he skipped the voluntary portion of the offseason program at the team facility, forgoing a $100,000 workout bonus. Now the Bears have until the July 15 deadline to get the Bears’ most lethal offensive weapon to sign a multiyear contract. Otherwise, Robinson will play out the 2021 season on the franchise tag and will become a free agent again next year.

Although Chicago has yet to convince Robinson to sign an extension, it was extremely important to at least retain him for the upcoming season, especially if Fields earns the quarterback job. Chicago lacks depth at the wide receiver position behind Robinson. The Bears have a pretty decent running game with David Montgomery and Tarik Cohen in the backfield. However, outside of Robinson, Chicago’s top receivers are Darnell Mooney and Anthony Miller. While Mooney has some upside, Miller has failed to prove much through his first three seasons in the NFL. The Bears need Robinson to have a monster season if they have any chance at making the playoffs.

CLICK HERE TO GET THE BEST CHICAGO BEARS TICKET DEALS!

NFC North: The NFC North is wide open for the taking, though that largely depends on the outcome of the ongoing Aaron Rodgers situation in Green Bay. If the Packers give in to Rodgers’ desire for a trade, the division will truly be up for grabs. However, If Rodgers remains in Green Bay, it is hard to imagine any team other than the Packers winning the division title.

Matchups: Chicago will have a difficult schedule to overcome this upcoming season. The Bears start the season on the road with a tough matchup against the Rams. However, Chicago then has three very winnable games over their next four weeks before beginning an extremely difficult stretch of games between Week 6 and Week 9. Following their Week 10 bye, the Bears face four divisional opponents over their next five games. That stretch could very well determine whether they inch into the postseason or not.

Overall: The Bears are aiming to make the playoffs again, but that will largely depend on the team’s quarterback play, whether it is Dalton or Fields. If Rodgers gets traded, Chicago could very well steal the division. However, the Bears still have to overcome a schedule jam-packed with tough opponents and playoff teams.

Prediction: Chicago will finish the season with an 8-9 record and will not make the playoffs.

CLICK HERE TO GET THE BEST CHICAGO BEARS TICKET DEALS!