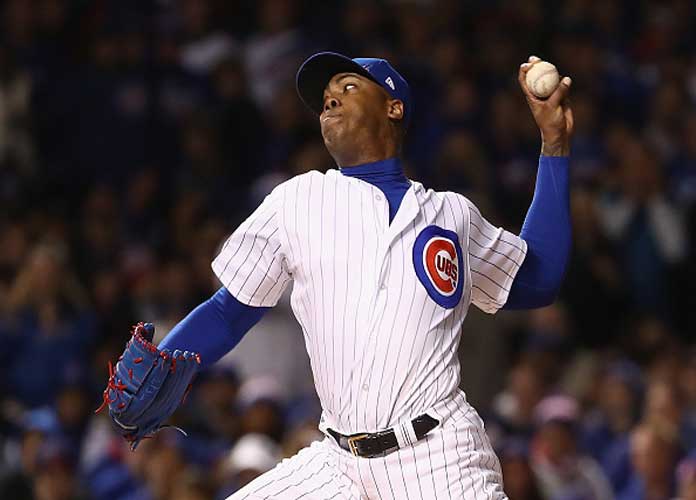 CHICAGO, IL - OCTOBER 30: Aroldis Chapman #54 of the Chicago Cubs pitches in the seventh inning against the Cleveland Indians in Game Five of the 2016 World Series at Wrigley Field on October 30, 2016 in Chicago, Illinois. (Photo by Elsa/Getty Images)

Aroldis Chapman has just landed a huge deal with a big MLB team.

The hard-throwing lefty closer reached an agreement to return to the New York Yankees late Wednesday, signing a five-year, $86 million contract to set a new record for the highest-priced deal ever for a relief pitcher.

MLB Network Insider Ken Rosenthal of FOX Sports was one of the first to report the big news:

The pact shatters the MLB record for a reliever set just two days earlier by new Giants closer Mark Melancon, whose four-year, $62 million deal had itself topped Jonathan Papelbon’s four-year, $50 million contract back in 2011 as the new No. 1. New York’s new deal for Chapman.

Chapman was the team’s closer for the first half of 2016 after being acquired last December from Cincinnati.

Many believe they Yankees are taking a major risk in terms of both years and money with this deal.

In a season split between the Yankees and the Chicago Cubs, Chapman, a 28-year-old Cuban-American, managed to strike out 90 players in 58 innings. Those innings were truncated by a month-long suspension at the beginning of the season for a domestic violence incident last December. He also posted a 1.55 ERA with 36 saves. That marked Chapman’s fourth year out of the last five with an ERA of 2.00 or below, and since becoming a full-time closer in 2012, he has posted a strikeout-per-nine rate of 14.0 or higher every year.

After being acquired by the Cubs at the trade deadline, Chapman played a crucial role in the team’s World Series run, throwing 15 2/3 innings over 13 games, including an incredible eight-out showing in Game 5 of the Fall Classic.

Fans have understandably mixed opinions about Chapman given his history both on and off the field. Some fans even began trends by donating fixed sums of money to an anti-domestic violence group every time the closer recorded a save.

Chapman will likely pair well with the Yankees’ Dellin Betances. However, the team faces several issues. The pitching rotation behind ace Masahiro Tanka is a disaster, and includes the perpetually disappointing Michael Pineda, the aging CC Sabathia and a group of young pitchers– including minor league prospects acquired from recent trades– whose real impact with the Yankees won’t likely be seen for another few years.

Furthermore, the Yankees recently seem to be investing in youth supplemented by short-term contracts and keep attempting to remain below the luxury tax limit they have surpassed for every year since they were formed (and with they were forced to pay hefty fines for as a result).

Thus, the Chapman deal seems like a very strange decision. As part of the new Collective Bargaining Agreement, the luxury tax limit is increasing (albeit by a small amount, from $186 million this year to $195 million next, and with penalties rising commensurately), which allows the Yankees more wiggle room.

However, New York already had $149 million in salary committed to the 2017 roster, not including arbitration costs and what needed to be spent in order to fill out the team. Chapman will now take up a large portion of that leftover space.

CHICAGO, IL – OCTOBER 30: Aroldis Chapman #54 of the Chicago Cubs pitches in the seventh inning against the Cleveland Indians in Game Five of the 2016 World Series at Wrigley Field on October 30, 2016 in Chicago, Illinois. (Photo by Elsa/Getty Images)