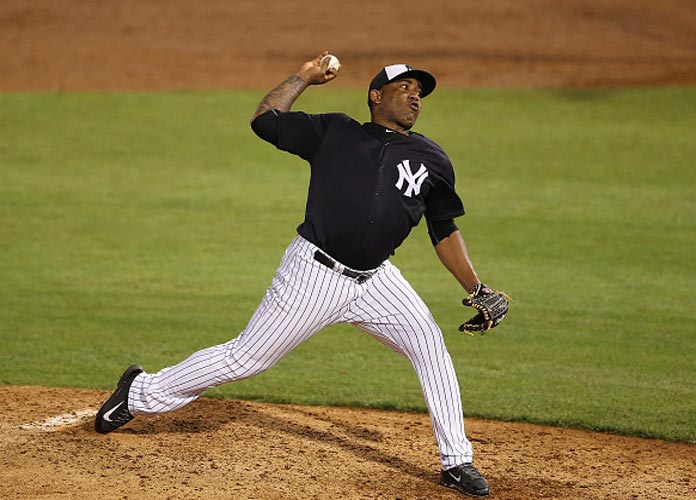 Caption:TAMPA, FL - MARCH 28: Diego Moreno #77 of the New York Yankees pitches during the ninth inning of the Spring Training Game against the Detroit Tigers on March 28, 2016 at George M. Steinbrenner Field, Tampa, Florida. The Yankees defeated the Tigers 3-2. (Photo by Leon Halip/Getty Images)

The New York Yankees were supposed to host the Houston Astros on Monday at 1 p.m.

as part of opening day. However, people in New York woke up to snow on the ground this morning and temperatures of under 40 degrees. Although temperatures are expected to rise, rain is forecast all day, with a 75-95% probability.

Thus, the Yankees’ Opening Day will be postponed one day.

To fans attending Opening Day: we’re currently assessing today’s weather forecast and hope to have a better idea of next steps in ~30 mins

Today’s Opening Day game is postponed due to inclement weather; will be made up tomorrow, April 5th. Stay tuned for official press release.

The Opening Day game will be rescheduled for Tuesday, April 5. According to The New York Times, the last time this happened was in 2008, the final opening day at the old Yankee Stadium.

“This year, on paper, they could be very good,” The Times’ Yankees beat reporter Billy Witz  said about the team, “but they’re also very old.”

The team had the oldest starting lineup last year, and this season only one position (second base) has a new (younger) player scheduled to start, Witz added.

Accordng to Witz, the biggest question heading into the opening game, however, is how the reconfigured bullpen (the team’s relief pitchers) will pan out. New closer Aroldis Chapman will be out due to serving a 30-game suspension over domestic violence accusations.

TAMPA, FL – MARCH 28: Diego Moreno #77 of the New York Yankees pitches during the ninth inning of the Spring Training Game against the Detroit Tigers on March 28, 2016 at George M. Steinbrenner Field, Tampa, Florida. The Yankees defeated the Tigers 3-2. (Photo by Leon Halip/Getty Images)

Read more about:
Houston Astros New York Yankees Opening Day rained out
Listen to the uInterview Podcast!
Get the most-revealing celebrity conversations with the uInterview podcast!